Book Review: The Unincorporated Man by Dani and Eytan Kollin 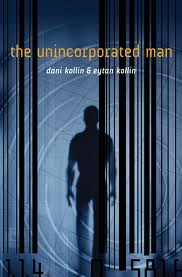 Justin was dying of cancer when he had himself cryogenically frozen in an abandoned mineshaft.  Woken 300 years later into a new, and very different world, he realizes that he cannot abide the necessity to incorporate - allowing others to buy and sell parts of him as stock.  He falls in love with his reanimation specialist - a serious moral crime, and is hounded by Hektor Sambianco on behalf of GCI - the reigning corporation - in whose facility he was reanimated.

This is a very slow read and a thought provoking one.  The first 100-150 pages are all character development and world building, as set up for the events later on.  Despite being a slow read, it is by no means a boring one.  The background information necessary for this book is given in realistic ways, rather than info dumps (with one later exception), and delves more heavily into history and socio-economics than most dystopian novels.

The world is incredible.  It's intricate in all the ways dystopian fiction usually isn't.  Instead of using a corrupt government, the world is focused on corporations and people.  Incorporation means that at birth every citizen has 100 000 shares.  Parents get 20% and the government 5%.  The rest of the person's value is theirs to barter for services, starting with their education.  Saavy people can bargain for a better education at a smaller percentage of their future earnings.  The flip side of the system is that shareholders can dictate where you work, audit you if you make decisions they don't like, and have a say in your life.  People who want more control over their lives can buy back their own shares, gaining majority.  As pointed out by several characters, this system has the effect of making you care for others you have stock in (and anyone can buy stock of anyone else provided they have the cash for it).  You want to see those people succeed so their stock prices rise and you earn money from them.  The downside, and where Justin's problem comes in, is the lack of personal freedoms associated with the system.

Equality between the sexes (or lack thereof) is never mentioned, but there are a few lines that indicates sexual orientations of all sorts are acceptable and, if the names are anything to go by (since physical descriptions are minimal) there's little to no racism.

One of the issues I had with the book was that, like the future of This Perfect Day by Ira Levin, I actually thought it was pretty good.  There's still poverty (discussed/shown briefly later in the book), but the poor all have jobs and houses, are well fed and able to climb to greater things if they're lucky and/or work hard.  It's an issue because the majority of the book consists of Justin bucking society to not only remain unincorporated, but, as he's pushed over and over again by Hektor Sambianco to incorporate, becomes an advocate of unincorporation and freedom for everyone.  This decision creates problems Justin didn't foresee for the world around him.

It's very much a Western idea that things should change to suit the individual rather than society.  Perhaps it's because I lived in Japan for two years, but I actually believe the good of the many does outweigh the needs of the few.  Justin believes that he's right and there can be no compromise.  His point of view in the book that his way (so called freedom) is better than incorporation, especially given the reality of the world the Kollin brothers have created, is arrogant.  He simply doesn't understand enough about how this world works to make the determination that incorporation is wrong, a point which is pointed out to him by several of his friends later in the novel.  Indeed, his lack of understanding when it comes to 'the poor' of this new world (as he's rich and doesn't need to associate with them or live like them) just further removes him from reality.  And when things start going wrong in his name - well, all I could think of was Paul Atreides from Dune, who as Muad'Dib unleashed a war that he didn't want but couldn't stop.  Justin doesn't realize the consequences his actions will have on the system at large, consequences that he cannot stop, whether he wants them or not.

While I hated Hektor Sambianco as a person, there were times when he was the only one to see the consequences of Justin's actions beforehand, making his own actions sometimes understandable.  Having said that, he causes more problems than he solves by harrassing Justin.  He views the world in very black and white terms, much as Justin himself does.

It's a fascinating novel, and a great addition to the dystopian oeuvre.  If you're looking for action, look elsewhere.  If you want a book that will make you think about the way the world works, then pick this up.
Email ThisBlogThis!Share to TwitterShare to FacebookShare to Pinterest
Posted by Jessica Strider at 09:00

I've seen this book floating around, and it sounds like something I might like, despite its flaws. thanks for bringing it back to my attention! :D