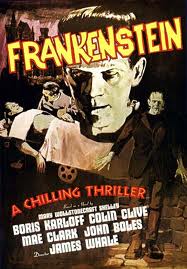 Pro/Cons: major divergences from the novel

The movie diverges from the novel by Mary Shelley in several ways, not least of which is making the monster (Boris Karloff) unintelligent.  Switching Frankenstein's first name with that of his friend caused me a fair amount of confusion when watching the film.  Then again, this film is much more entertaining than the novel, with less of Frankenstein's woes.

This film has all the hallmarks of a good horror flick of its time: mad scientist, hunchbacked assisstant, scary monster, murder and mobs.  A few moments come close to being humerous, especially when viewed today.  Being in black and white really helps it keep the mood though.  The actors do such a great job, especially Karloff, whose Frankenstein has become the iconic image of that character.

The monster is almost sympathetic, objecting to its mistreatment at the hands of Fritz and then Dr. Frankenstein.  It could be used as a cautionary tale of how bullying and abuse can create monsters, if the victim is pushed hard enough.

This movie has had such a huge influence on later films and it's worth the time to watch it.  And you can do so for free online.