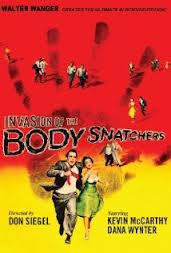 Dr. Miles Bennell (Kevin McCarthy) returns home early from a medical conference due to a high number of patients, but when he arrives only a few remain.  These people claim that family members aren't actually family members, despite looking identical and having that person's memories.  Over the course of two days, as he woos the also recently returned former love of his life Becky Driscoll (Dana Wynter), Miles slowly comes to realize that something nefarious is indeed happening in Santa Mira.

I studied this film in university, so I remember that the frame story, where Miles speaks to a doctor outside Santa Mira, wasn't originally supposed to be there.  Indeed, the ending is much more terrifying if you take that frame out.

On this rewatch, I saw the black and white version of the film.  The use of shadows and light to enhance suspense and add to the horror was masterfully done, as is the soundtrack.  In one scene in particular, the music clues you in to a major change before the actions of the actors.

The actors are fantastic, showing love and concern at the beginning, and fear and horror towards the end.  The story arc allows for character development despite the film's taking place within a short period of time.  I also learned that 'going to Reno'  used to be slang for getting a divorce, mentioned near the opening of the film.

Generally believed to be a commentary on McCarthyism, Invasion of the Body Snatchers is a classic.  If you want a happy ending, read the book by Jack Finney that this was based on.  Want a brilliant science fiction movie, watch this film.

Email ThisBlogThis!Share to TwitterShare to FacebookShare to Pinterest
Posted by Jessica Strider at 12:35