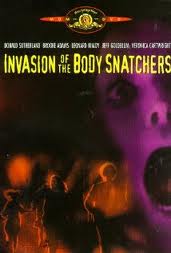 Pros: lots of famous - and terriffic - actors, several nods to the original film

Elizabeth Driscoll (Brooke Adams) discovers a new flower and brings a bloom home.  Her co-worker, and fellow health inspector Matthew Bennell (Donatld Sutherland) doesn't believe her when, the next day, she complains that her boyfriend isn't her boyfriend anymore.  He convinces her to attend his friend, a psychiatrist,'s book launch.  Dr. David Kibner (Leonard Nimoy) has heard similar stories and discounts it, but Elizabeth and Matthew discover more and more evidence that something sinister is going on.

This film is both a sequel to and remake of the far superior 1956 film of the same name.  While the acting here is great, with several famous people (including Jeff Goldblum and Veronica Cartwright - from Alien).  Among the many nods to the original film is a brief appearance of Kevin McCarthy, the Doctor who discovers the pods in the 1956 version (it's this inclusion as well as the fact that it takes place in a city with obvious farms working at growing the pods, that make this feel like a sequel).

Where the film goes bad is with its overly dramatic soundtrack that's constatly bombarding you and the extreme use of bizarre camera shots - non-level shots, camera jiggle, seeing action via mirrors or through broken glass.  The pods are also more grotesque than in the original.

Several plot points that make perfect sense in the original don't here, because of the occupation changes.  It's natural to complain to a doctor in a small town who knows everyone that someone you love isn't right, not so natural to complain to the customer dropping off his dry cleaning.  Similarly, in the original, the changes between regular and pod people are so minor that only close relatives can tell the difference.  In this film the difference tends to be massive.  Take Elizabeth's boyfriend.  He starts out a die hard sports fan who'se very expressive.  The next day he's at work early, and couldn't care less about sports.  In other words, he changes in very easy to spot, unsubtle ways.  Unlike in the first film where the doctor talks to pod people and can't detect any difference, all Elizabeth should have needed to do here to convince Matthew she wasn't crazy was have him talk to her boyfriend.

The ending was pretty good, and different from that of both the earlier film and the novel.  Still, if you're interested in pod people, I'd highly recommend seeing the black and white 1956 version.

Email ThisBlogThis!Share to TwitterShare to FacebookShare to Pinterest
Posted by Jessica Strider at 12:19