Book Review: The Malice of Fortune by Michael Ennis 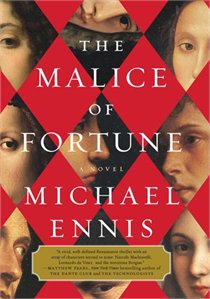 Damiata, once lover of Juan, Duke of Gandia, and mother of his illegitimate child, is accused by Pope Alexander VI (the duke's father) of aiding in his murder.  In order to clear her name and reclaim her son she must uncover the true murderers.  She is sent to Imola, where a recent string of murders has uncovered an amulet belonging to Juan and where the Pope's first born son, Cesare Borgia, Duke of Valentinois, is brokering a peace with the condottieri (mercenery fighters) Damiata is certain killed her lover.

Meanwhile, Imola is also home to the Florentine secretary Nicolo Machiavelli, who fears that Cesare's peace with the condottieri will mean the destruction of his beloved Florence.  Joining forces with Damiata and Cesare's engineer general, Leonardo da Vinci, Machiavelli tries to solve the murders and make his study of human nature, that eventually lead to the writing of The Prince.

Ennis does a fantastic job of blending known history with his murder mystery.  He makes certain assumptions regarding events and characterizations based on primary sources (which he discusses briefly in an afterward to the book so the reader has a better idea of what's true and what he fabricated for the novel).

The first part of the book is told by Damiata, with the rest by Machiavelli.  As the characters get closer to discovering the identity of the murderer, Ennis manages to maintain a spirit of uncertainty, making it hard to guess who the real culpret is.  This is helped by the number of likely suspects being investigated and the difficulty in performing the investigation.

There is a lot of good detail regarding the characters and the setting, especially with regards to Machiavelli's beliefs on human nature.  There are also a few illustrations in the novel, showing scientific principles important to the plot and diagrams drawn by da Vinci.

I'd recommend this to fans of Umberto Eco (particularly The Name of the Rose) and Karen Maitland's Company of Liars.
Email ThisBlogThis!Share to TwitterShare to FacebookShare to Pinterest
Posted by Jessica Strider at 11:35