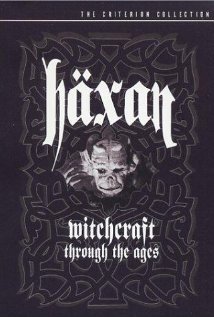 Cons: only minor critical analysis, some of his facts/analysis have since been disproved *

The version of this film that I saw was black and white with red - and occasionally blue - colour tinting.  It had no soundtrack, which made the film... interesting to watch.  The film is split into seven parts.  It's done in a documentary style, with the background history of superstition explained using historical images and models before dealing specifically with witchcraft as understood in the middle ages.  Each part tackles the next progression in witchcraft, from generally understood practices, to their capture, torture and confession, denouncing of other 'witches', and what in the present times (the 1920s) might have been considered witchcraft in the past.

The production values are pretty good, the sets and situations somewhat overemphasized to show the director's points but within realistic lines.  More recent scholarship has disproved the number of witches he claims were killed (8 million in 8000 years)*, with older scholarship removing hysteria (his explanation of why women might have been accused of witchcraft in the past) as a disease.

I liked how he pointed out - if briefly - that people of his day still held on to some superstitious beliefs (specifically the spiritualism of the day that dealt with Ouija boards and seances).  His main point, that people have never been entirely free of superstitions (and probably never will) was a cautionary word against creating new witch hunts when dealing with things that are unexplained, or as a way of getting rid of unwanted people.

It's an interesting film if you're into the history of witches and medieval justice, though if it's the justice you're after, know that he does make some minor errors there too and use the information in this film as a jumping off point for more research rather than end source material.

* Turns out I'm wrong here.  I know the high number of witches executed were lower than assumed during the Middle Ages, but it's significantly higher in the Renaissance than I believed.
Email ThisBlogThis!Share to TwitterShare to FacebookShare to Pinterest
Posted by Jessica Strider at 09:30