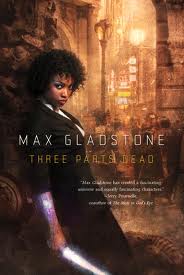 Cons: *misuse of some big words

Tara Abernathy has been cast out by the Hidden Schools, but not before she graduated as a Craftswoman, able to use soulstuff to perform God-like tasks.  She's hired by Ms. Kevarian of the firm of Kelethras, Albrecht, and Ao, to help with a delicate legal case.

In the city of Alt Coulumb the God, Kos Everburning, has died.  Ms. Kevarian, hired by the clergy to oversee his resurrection, must contend against her former associate, and Tara's former professor and the reason she was kicked out of school, Alexander Donovo.

Helping the two women in their investigation of why Kos died, is the last person to see Him alive, Novice Technician Abelard.

This is a novel with a lot going on.  There are several interconnected plots set up by various people for various reasons.  They take place in a city that's a fascinating mix of technology, religion and magic.  The city, for example, has trains and elevators that run off steam produced by Kos.  The Craft is an attempt by humans to recreate the power of the Gods by using the stars and soulstuff, either their own or that stolen from others.  Use of the Craft is centered around dealing with legal contracts regarding the use of the power of the Gods for different purposes (like powering elevators) and for raising the dead. But it can also be used for protection and myriad other things.  It's never fully explained and while it has limits, the limits are not examined in much detail.

The book has been marketed as an urban fantasy novel, probably because it takes place in a city - though a fantasy one (a throwaway line in the book implies that this world is in an alternate dimension).  But the tone, feel and use of magic are all traditional fantasy, if fantasy with a heavy mystery slant.  The complex ending reminded me of James Knapp's Revivors books, with several seemingly unimportant details actually being crucial to the story.  And for those looking for fantasy novels that aren't parts of giant series, this book is entirely self-contained.  There's plenty of room for the author to continue the story, but readers get a finished plot arc in this volume.

Tara's a great character, strong but still learning and always looking for approval from her Boss.  My only complaint with her is that she's quite smart and yet does something remarkably stupid at the beginning of the book.  She hides the fact that she's a Craftswoman, but then uses craft in a major way that was bound to cause trouble for her.  I liked that she was a dark-skinned character, though, beyond the occasional descriptions there was nothing that indicated she was different from the others (which could just be because this world doesn't have the same cultural/racial divisions our world has).  It was nice to see a POC protagonist without being a stereotype of one kind or another.  Tara was definitely her own woman.

All of the characters in this novel feel three dimensional.  They each have failings, though Ms. Kevarian is more of an enigma than the others up to the end.  I really liked Cat and her addiction, and how that played out in the novel at large.

I really enjoyed Gladstone's writing style, with its occasional bouts of subtle humour and subversion of expectations.  It seems petty to mention, but there was one thing I noticed a few times which disturbed me a little.  He threw in 'big words' occasionally, not often enough to be irksome if you don't know what they mean, but he used two words (one I knew, one I had to look up) incorrectly.  It's fine if you want to sound erudite to throw in big words now and then, but if you're an author you've got to understand the words you're using.  Calling someone who's cutting up a cadaver a 'vivisectionist'* isn't going to impress those who know (or look up) the word.  Vivi means life, so she's only a vivisectionist if her subject is still alive when she starts cutting (thanks Island of Doctor Moreau).  Thankfully it only happened a few times, but readers do pick up on these things, and it doesn't look good for an author to have their words questioned.  I specifically looked up the next few big words I encountered, just to see if the author was using them correctly (one he didn't - caesura **, the other he did - palimpsest).

If you're not nitpicky, the big words are easy to pass over as their meanings (or, what the author intends them to mean) are easily gleaned from context.  This book is well worth reading for the plot and characters.  It has one of the most brilliantly tied up endings I've read in quite some time.  If you're looking for a different kind of fantasy, one with excellent world building and a complex mystery, here's your book.

[* I got an email from the author explaining that he knew vivisectionist was wrong, but used it because it's a prettier word than the alternatives.  I can understand that.
** He also mentioned that caesura can mean a pause in work - ie, that the character is putting the books down for now and picking them up again later.  The definition I saw only mentioned that it is "a complete pause in a line of poetry or in a musical composition".  I'm willing to accept that there is more than one definition of the word and that I found the wrong one.
As I said, these were nitpicky points and no dictionaries are needed to understand or enjoy the story.  On the plus side, I learned 2 new words. :)  ]
Email ThisBlogThis!Share to TwitterShare to FacebookShare to Pinterest
Posted by Jessica Strider at 09:00