Book Review: Beyond by Graham McNamee

This is my second R.I.P. (Readers Imbibing Peril VII) review, and the first book.  I'm not sure I'll be able to get a second book in as planned, but we'll see.  If you want to see what reviews others have written, check here. 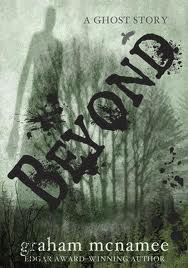 The real reason behind Jane's numerous brushes with death is too crazy for anyone but her fellow 'creep sister' to believe.  So when she starts hearing voices and seeing things - in addition to her already extreme sleepwalking and migranes - she only tells her friend Lexi what's really going on.  Somehow, she's picked up a ghost.  One who wants her dead, and is able to use her own shadow - and body - to kill her.

This is a brilliantly written teen novel.  The chapters are short and punchy, making it very fast paced and quick to read.  The characters are fully fleshed: Jane's parents who love their daughter and want to help but don't know how.  Jane, who wants to explain but knows they won't believe her.  Lexi, whose father left when she was young, and who makes dark films in order to understand the world.

The story is explained through quick flashbacks to Jane's various deaths, her friendship with Lexi and dealing with the present.  There is a love interest, but it's kept low key and just barely factors into the plot.

The ghost is suitably terrifying, as is it's reasoning for wanting Jane.  There is some adult creepiness involved with the ghost's past that comes into play with Jane's present, but it's passed over with limited details.

It's a great book for younger teens to adults who want a decent - but not gory or too terrifying - scare.   And the author's Canadian. :)
Email ThisBlogThis!Share to TwitterShare to FacebookShare to Pinterest
Posted by Jessica Strider at 11:19

I like the sound of this. I've read two ghost stories for RIP and it's interesting to compare the styles and themes.
This sounds really good.
Lynn :D