Not a Review: From Age to Age by Edward Foley

This isn't a proper review because I only had time to read select chapters of interest.

When I did my degree in medieval studies I learned about languages, manuscripts, church architecture, drama, literature and philosophy. It shocks me now that not one professor suggested learning about Catholicism and how the church's liturgy affected architecture, etc. The first inkling I had that I'd missed something massively important was during my graduation mass (the first time I attended mass), and so many things suddenly clicked. Recently I've been trying to plug that gap in my knowledge and came across From Age to Age: How Christians Have Celebrated the Eucharist. 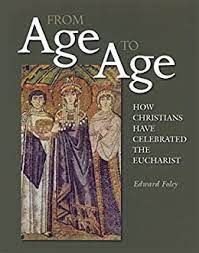 The book has an introduction followed by 7 chapters:
1. Emerging Christianity: The First Century
2. The Domestic Church: 100-313
3. The Rise of the Roman Church: 313-750
4. Frankish Domination: 750-1073
5. The Prelude to Reform: 1073-1517
6. Revolt, Reform and Rigidity: 1517-1903
7. The Return to Change: 1903 and Beyond
The book concludes with a glossary and bibliography.
Within each chapter the author subdivides the information into categories for architecture, music, books, and vessels for administering the Eucharist.
The book explained terms I've seen for years without properly understanding them (for specific books and liturgical vessels in particular), as well as giving some indications as to how the space in a church was used over time (the development of the choir, the slow exclusion of the congregation from singing/participating).
If you don't know the difference between a missal and a breviary, or what a pyx is, this is an easy to read primer that covers the whole of Catholicism. It doesn't go into a lot of detail, but it gives a good foundation.
Email ThisBlogThis!Share to TwitterShare to FacebookShare to Pinterest
Posted by Jessica Strider at 09:00