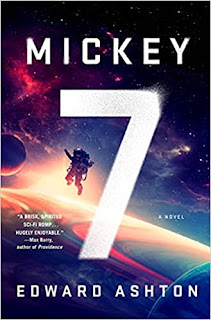 Mickey Barnes is the expendable for the Niflheim beachhead colony, which means if there’s a dangerous job, he’s the one doing it. So it’s not surprising that when his seventh iteration falls into a deep hole he’s left for dead. Unfortunately when he makes it back to base a new copy of himself is sleeping in his bed. Multiples are the biggest taboo, so the Mickeys must hide what they are even as trouble is brewing with the planet’s indigenous lifeforms.

This book was a lot of fun to read. It’s quick paced and engaging, with Mickey7 including important incidents from his past while narrating the events of the present.

I went from thinking of Mickey7 as a decent guy, then kind of a jerk, then back to being a decent guy. Some of his history paints him in a bad light though it seems dying multiple times has improved his character somewhat. I really liked Nasha and thought their relationship was great.

The book poses some interesting ethical questions without delving too deeply into them or dwelling on them for long. It’s mostly a lighthearted read.

The world-building was great. There was a lot more explanation about the larger universe than I expected, with Mickey explaining things about life on his homeworld, Midgard, and some of the other colonies (successful & failed).

The ending ties together all the various narratives Mickey throws at you. I especially loved how his study of history gave him insight into how to think of the native species.

If you like easygoing, sometimes humorous, sometimes serious SF, give this a go.
Email ThisBlogThis!Share to TwitterShare to FacebookShare to Pinterest
Posted by Jessica Strider at 10:07