Book Review: The History of Tarot Art: Demystifying the Art and Arcana, Deck by Deck by Holly Adams Easley and Esther Joy Archer 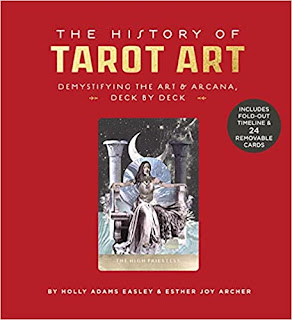 Cons: images of a few discussed cards not included

Note: I received a review copy of the ebook from Netgalley and therefore cannot comment on the removable Sola-Busca tarot cards or fold-out tarot timeline that the physical book comes with.

The History of Tarot Art takes you on a journey of the most influential tarot decks. After a short introduction there are 12 chapters on specific tarot decks, followed by a chapter that showcases several contemporary decks. Then there’s a quick epilogue and an appendix where the authors explain how to do a tarot reading and provide 2 spreads for beginners.

Each chapter talks about the history of that deck, who the artist was and why the deck was created. In a few cases other artworks by the artist are included so you can see their general style. The artists also explain the wider influence of the decks and offer a few suggestions of other decks you might like if that style of art speaks to you.

In the introduction the authors make it clear that they are only including verifiable history, no ‘fakelore’. I really appreciated the amount of research that went into this book and how ideas about tarot developed from playing cards to cards for divination purposes.

There are a lot of illustrations in the book, mostly specific tarot cards from the decks discussed and recommended. In a few places the authors spoke about specific cards that did not show up in the book, which was unfortunate. There were also a few places where the formatting of the book meant the authors spoke about one specific card, like the sun card, and a different deck’s sun card appeared on that page, which was a bit confusing.

It’s fascinating to see how styles changed over time and how various artists created their own decks to address the fact that the current decks didn’t speak to them or show them as practitioners (so feminist and more inclusive decks that made the esoteric content more accessible).

On the whole this is a fantastic book if you’re interested in the art and history of tarot cards.
Email ThisBlogThis!Share to TwitterShare to FacebookShare to Pinterest
Posted by Jessica Strider at 10:09