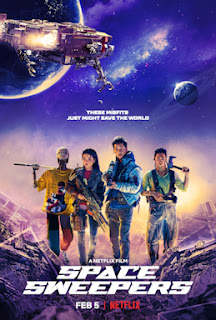 Cons: some info dumps that were so quick I didn’t catch all the information

A misfit crew of space sweepers always low on cash, salvage a ship with a young girl on board. A girl the news reports say is actually a robot carrying a hydrogen bomb. Recognizing her value, one crew member suggests a risky venture.

This is a Korean film being distributed by Netflix. I absolutely loved how they handled language, with instant translators for the characters and subtitles for the viewers. It was great seeing a film that acknowledged the variety of human language and allowed that to be a feature.

The special effects were surprisingly good for a non Hollywood film. There’s a lot of action, and ideas brought up early in the film come back as important elements towards the end.

There’s very little down time to get to know the characters though. There was a scene where quick backstory for the crew was told in what I thought was a propaganda TV report so I didn’t pay close attention, but turned out to be legitimate histories. The information was also conveyed so quickly that even once I started paying close attention I still couldn’t catch everything. That wasn’t the only time in the film where I felt I was missing crucial information.

The characters were all quirky though I didn’t particularly like any of them until the end. I liked seeing a Korean crew and I thought they handled the robot’s quest for skin well.

The story wasn’t entirely original but it was told in an engaging way.
Email ThisBlogThis!Share to TwitterShare to FacebookShare to Pinterest
Posted by Jessica Strider at 17:45