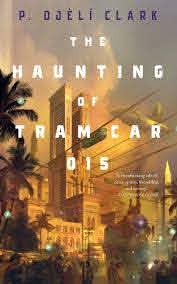 Agents Hamed and Onsi from the Ministry of Alchemy, Enchantments, and Supernatural Entities, are sent to investigate a haunting at the Ministry of Transportation. But budget concerns make dealing with the entity harder than expected.

The book is set in an alternate 1910s Egypt during suffragette protests. I liked how the fight for women’s ability to vote was tied into the rest of the story. Though it’s a novella, there’s a wealth of detail making Cairo come alive. I loved the diversity of the city, its people, food, and clothing. I loved the included - historically accurate - references to ancient and medieval documents regarding the paranormal.

The evil entity they’re dealing with wasn’t one I’ve heard of so I found it interesting - and creepy.

I found Hamed a boring protagonist. He’s not quite the stereotypical detective with a new recruit, but he’s close. I found the female characters significantly more engaging and would have liked seeing more of them and their points of view.

It’s an engaging and entertaining story that had me looking for other stories and books by Clark, including the story alluded to regarding Fatma’s assignment at the end of this one.
Email ThisBlogThis!Share to TwitterShare to FacebookShare to Pinterest
Posted by Jessica Strider at 09:50