Book Review: Power and Profit: The Merchant in Medieval Europe by Peter Spufford 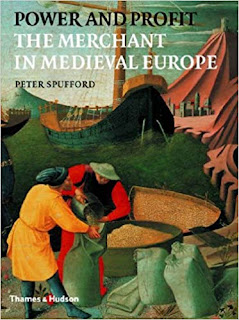 Pros: lots of images and maps, so much good information

The book consists of 8 chapters: The transformation of trade; Courts and consumers; From court to counting house; Helps and hindrances to trade; Trade in manufactured goods; Trade in foodstuffs, raw materials and slaves; Imbalances in trade; and Conclusion: the pattern of trade.

The book on the whole goes into the nitty gritty of all aspects of trade, so if you’re not interested in how long it took for couriers to go from one place to another vs the same route travelled by a 4 wheeled wagon, 2 wheeled wagon, or pack animal, then this isn’t for you.

I found the writing style rather dry and academic at times. At other times it grabbed my interest, even if the section wasn’t on a topic I was particularly interested in. For example, I found the sections of the cost of road maintenance and who was expected to perform and pay for it really interesting.

Each chapter is subdivided, though unless you know where the information you want is located, you may not find it easily. For example, the section on how quickly couriers can travel isn’t in the same chapter as that of wheeled wagons, though the author does put in page numbers at times to help you find complementary information. I tried to return to an interesting paragraph about bridge building done by merchants and experienced some frustration as it wasn’t in any of the sections labelled as being about bridges, but in a section called ‘Commercial pressure for improvement’.

If trade in the middle ages is of particular interest to you than you will learn a lot about it here. If you’re interested in fleshing out a novel, again, there are some real gems though you may find it a bit tiresome locating them.

A few things I learned: some merchants paid innkeepers to store and repack good, then arrange transit to the next inn. Rooms in inns contained several beds separated by curtains and travellers found themselves sharing beds with strangers. Merchants braved passes in the Alps during the winter, even when the passes were dangerous. In some cases merchant houses paid for repairs (and even the building) of bridges if the communities responsible for them neglected them. Cities quickly grew up around fairs, and died out quickly if those fairs moved. Though inns were profitable businesses, hospices (hostels for pilgrims or the poor/hospitals), even when properly run, were not. Slaves were traded by Southern Italians from the 1300s on, and owning them was only illegal if they were Christians (and some, captured in the Balkans, were). The children of slaves were free, so there was no ‘self-perptuating’ market.

Chapter 5 on where and how trade goods were manufactured was very interesting. Each section was fairly short but packed in a ton of information. Chapter 6 on bulk trade items (things like raw wool and grain) was also interesting, talking about which goods were worth transporting and how larger cities needed to import food as the local areas couldn’t support them.

The book has a large number of black and white as well as colour images illustrating medieval processes. These are often later woodcuts, manuscript images or close-ups of the background in paintings where painters added scenes from daily life. There is also a lot of maps so it’s easy to understand the various trade routes and manufacturing centres.

It took a while to read as the information is very dense, but it’s worth the time and effort and you’ll come away knowing a lot more about the interconnectedness of the medieval world.
Email ThisBlogThis!Share to TwitterShare to FacebookShare to Pinterest
Posted by Jessica Strider at 10:26