Book Review: The Lives of Tao by Wesley Chu 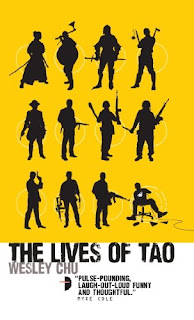 When Tao’s host is killed during a mission the alien entity must find a new host fast. Roan Tan is unsuitable in every way but beggars can’t be choosers. Now Tao has months to get him up to speed as an agent in the war between the Genjix and the Prophus because the enemy is up to something and Tao’s skills are needed.

I found this a challenging read in that I know enough history to understand that both alien sides of this war have done horrific things to humans and question the humans’ insistence that their side is doing things ‘for the betterment of humankind’. I’m sorry, causing a plague to make the war you started end faster isn’t helping the humans who will die either way. I therefore had a lot of difficulty sympathizing with Tao’s viewpoint.

If you can divorce yourself from the larger issues involved in the story (like the lack of human consent to becoming a host and having your life hijacked by a cause you can’t fully understand as these aliens have been waring on earth since their cashed spaceship killed the dinosaurs) it’s a fun romp. The story is basically a long training montage as Roen goes from an unhealthy lifestyle to becoming a decent agent (there’s still room for improvement in later books).

The book does - towards the end especially - deal with some of the above issues I had and I found the book quite thought provoking in several ways.

I loved the underpinning of the aliens. It’s horrifying and clever to show that they’ve manipulated the largest events in human history. I’d have liked learning more about Tao’s past, though the story gives enough to understand how things got to this point.

I didn’t find it the most engaging read. Roan grew on me but wasn’t someone I wanted to spend a lot of time with. While the pacing was ok, there was a lot of downtime, especially around the training when I found the book kind of dull. It does give the ending more punch but this isn’t a book I’d reread.
Email ThisBlogThis!Share to TwitterShare to FacebookShare to Pinterest
Posted by Jessica Strider at 10:03