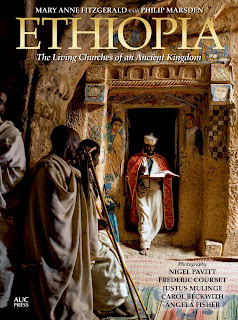 Cons: less information than expected, some sites get one or two photos while others get several

The book starts off with an introduction on the Ethiopian Tewahedo Church, which differs in may respects from other Christian denominations both in practice and beliefs (their version of the Bible contains 81 books. Contrast this with the 66 books in the King James Version used by Protestants, the fewest number of books used by a Christian denomination). There’s also a short section on some of the important Ethiopian saints, whose images decorate the churches.

The churches themselves are separated by geography: Aksum and Tigray, Lalibela and Lasta, Gondar and Lake Tana. It covers 66 churches. There’s a short section with amazing photographs of the major religious festivals. The books ends with a useful glossary of terms and some notes (the notes on photography are interesting as they point out how challenging getting such complete and well lit photographs was).

This is a gorgeous coffee table book. It’s massive (10” x 13.5”, and 2” thick). There are 520 glossy pages full of photographs. There’s minimal text on each church, just enough information to introduce it. Some of the photo captions mention fascinating tidbits that are worth reading (like notes on when certain images started being portrayed in churches. For example, images of the Deposition of Christ (Christ being taken down from the Cross) only show up after the Jesuits started preached in the country in the late 1500s).

In a few cases I was disappointed by how few photos there were of a particular monument. Abba Garima, an important monastery and forbidden to women does not have a single image from inside the church, nor is there an explanation for this (like they were unable to enter/photograph it). In contrast, the monastery of Debre Damo, also off limits to women, has some excellent photographs of the buildings and ceiling.

The photos themselves are clear with a lot of detail. It’s obvious a lot of work went into them.

If you are interested in Ethiopia, the expanded Christian church, architecture or religious art, this book is worth the price.
Email ThisBlogThis!Share to TwitterShare to FacebookShare to Pinterest
Posted by Jessica Strider at 10:13