Towards a Global Middle Ages: Encountering the World through Illuminated Manuscripts Edited by Bryan Keene - I requested this from Netgalley and am very excited to read this. Illuminated manuscripts are one of my favourite elements of medieval art. I have been reading up on Ethiopian history and art and was impressed that there are several essays on Ethiopia included. There are also essays on nations I'm not well versed in. Hoping to learn a lot from this book. 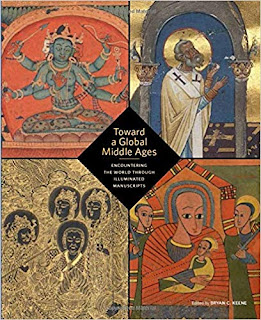 This important and overdue book examines illuminated manuscripts and other book arts of the Global Middle Ages. Illuminated manuscripts and illustrated or decorated books—like today’s museums—preserve a rich array of information about how premodern peoples conceived of and perceived the world, its many cultures, and everyone’s place in it. Often a Eurocentric field of study, manuscripts are prisms through which we can glimpse the interconnected global history of humanity.

Toward a Global Middle Ages is the first publication to examine decorated books produced across the globe during the period traditionally known as medieval. Through essays and case studies, the volume’s multidisciplinary contributors expand the historiography, chronology, and geography of manuscript studies to embrace a diversity of objects, individuals, narratives, and materials from Africa, Asia, Australasia, and the Americas—an approach that both engages with and contributes to the emerging field of scholarly inquiry known as the Global Middle Ages.

Featuring 160 color illustrations, this wide-ranging and provocative collection is intended for all who are interested in engaging in a dialogue about how books and other textual objects contributed to world-making strategies from about 400 to 1600.


Eridani's Crown by Alex Shvartsman - Not sure about this one, mainly because I'm currently burned out on fantasy, but I'll give it a go. 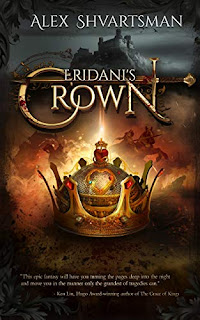 CURSED BY PROPHECY. CORRUPTED BY POWER.

When Eridani's parents are murdered and their kingdom is seized by a traitorous duke, she plans to run. After she suffers yet another unendurable loss, the lure of revenge pulls her back.

Eridani's brilliance as a strategist offers her a path to vengeance and the throne, but success may mean becoming everything she hates. To survive, she must sway religious zealots, outwit ambitious politicians, and confront bloodthirsty warlords, all with few allies and fewer resources. Yet the most menacing obstacle she must overcome is the prophecy uttered by a powerful sorceress:

Everyone you know and trust will come to betray you.


Starship Repo by Patrick Tomlinson - I have to admit, I tried his previous novel, Gate Crashers and it just wasn't for me. Humour is such a subjective thing. 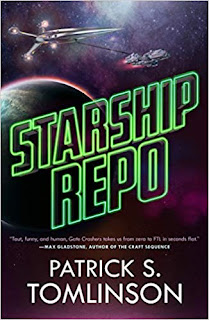 Firstname Lastname is a no one with nowhere to go. With a name that is the result of an unfortunate clerical error and destined to be one of the only humans on an alien space station. That is until she sneaks aboard a ship and joins up with a crew of repomen (they are definitely not pirates).

Email ThisBlogThis!Share to TwitterShare to FacebookShare to Pinterest
Posted by Jessica Strider at 21:27