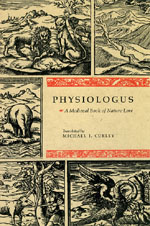 If you’re interested in medieval thought and art, the bestiary by way of the Physiologus was hugely influential. This book is a glimpse into the medieval mind, both with regards to how they saw the natural world and how they believed the natural and spiritual worlds overlapped.
Email ThisBlogThis!Share to TwitterShare to FacebookShare to Pinterest
Posted by Jessica Strider at 19:04