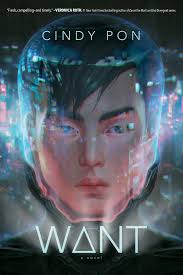 Jason Zhou has been living on the streets of Taipei since his mother died when he was thirteen.The haves (yous) and have nots (meis) are at odds in the city, a situation exacerbated by the terrible pollution covering the city in perpetual smog and acid rain, pollution the yous never experience, all but living in suits fitted with filtered oxygen and temperature controls. Zhou’s closest friends have come up with a plan to stop the creator of the suits, a man who’s also bribing and threatening - even murdering - politicians to prevent any environmental clean-up. That plan begins with him kidnapping a you girl for ransom. Because bringing down the man is an expensive business.

I loved that the book was set in Taipei. It’s cool inhabiting another city, even if it’s one in an unpleasant extrapolated future. Given the way global warming is being treated, I have no problem believing that the future will be covered in smog and that life expectancy will drop because of it. I also have no problem believing that the rich will isolate themselves from the problems of the world so long as those problems aren’t seen as directly impacting them.

Zhou and his friends all have different strengths, making them fascinating to watch as they work on their plan. I loved that they complemented each other’s skills and that though they didn’t always agree, they worked things out. Daiyu was also great, a mixture of determined, smart, courageous, and feminine. The characters all felt like fully fleshed out people.

The story was interesting, though I found it was slow at times. I never really worried characters wouldn’t pull through, even though there were some tense moments.

This is a great book.
Email ThisBlogThis!Share to TwitterShare to FacebookShare to Pinterest
Posted by Jessica Strider at 09:55