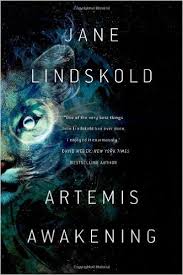 When Griffin Dane locates the planet he believes to be the ancient pleasure planet Artemis, his intention is to study it and return to his home world and bask in the glory of his historic discovery.  So when his ship crashes, stranding him there, he’s eager to find his way back to the stars.

He’s rescued from the wreckage by the Huntress Adara and her demiurge puma companion Sand Shadow, with whom she’s psychically linked.  They guide Griffin first to their village and then to a major city with relics left by the Seegnur, the people who made the planet and altered the inhabitants to be the perfect servants.  There they meet with the Old One Who Is Young, a man who has studied the technology of the Seegnur for decades.

But Griffin’s arrival has awakened something.  And things with the Old One aren’t what they seem.

I loved Adara and Sand Shadow.  It’s great to see a self-confidant young woman who gives and accepts help as the situation requires.  She knows her skills and when the location changes and her abilities are less in demand, finds something she can do to help that will use her skills.  By the same token, it was great to see Griffin fumbling on this ‘primitive’ world, accepting menial tasks as the only ones he’s qualified to do, and not complaining about it.  I really liked Terrell as well.  It was interesting how the three protagonists strengths and weaknesses complemented each other, and how the characters worked together.

The story begins sort of quest like, but there’s a series of overlapping mysteries when they get to Spirit Bay, which were quite interesting to read.  It was also interesting learning more of the Seegnur and how they modified things (via the social rather than scientific changes.  You don’t learn the science behind the genetic modifications but you learn about the different social strata and some of the abilities of people who were adapted for specified jobs).

There were minor romantic elements in the book.  The opening led me to believe that these would have a stronger impact on the story, so I was pretty happy to discover they didn’t.  There were some awkward conversations where the characters were honest about their feelings (or lack thereof), which I appreciated (the honesty, if not necessarily the awkwardness).  Some of the elements seemed a tad heavy handed, like Adara noticing Griffin’s eye colour in the middle of a life or death situation, which also struck me as being out of place. But on the whole I found the characters’ openness refreshing and the elements indicate that a romance may form as the series goes on.

The world-building is understated, but interesting.  Since the planet was specifically designed it still works on a feudal style system.  As with the romance, there are underlying elements but they only pop up from time to time.

It was an interesting read.

Book two, Artemis Invaded, is now out in hardcover from TOR.
Email ThisBlogThis!Share to TwitterShare to FacebookShare to Pinterest
Posted by Jessica Strider at 10:33