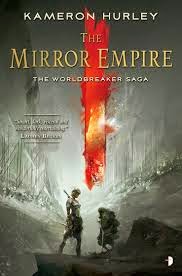 The dark star of Oma is rising, infusing power into blood magics that were lost for 2000 years.  Dhai on a dying world use that power to form gates to a mirror world they wish to conquer, one like theirs but where history went in a different direction, leaving the Dhai pacifists among more warlike neighbours.  But not everyone wants to see their reflections on this new world enslaved, and as more and more people on the imperilled world learn what’s happening, they start fighting back.

There’s a lot going on here and a ton of characters to keep track of, many of whom have similar sounding names.  There is a glossary of characters and terms at the back to help you if you forget who someone is.  The different nations are all distinct, with vastly different governments, attitudes, cultures, and languages.  It was fascinating reading about how each nation dealt with different problems.

The politics of the different nations, and how they interacted, was fascinating.  I enjoyed how Hurley brought in past battles and showed that various nations’ wars helped shape the current political climate.

There were a wide variety of characters the story followed (several men and women at different levels of power and skintone).  I started off liking most of them, though some of their choices as the book continued made me less sympathetic towards them.  In a few cases I ended up respecting what they achieved, even if I didn’t much like them as people anymore.

The magic system of drawing power from stars/satellites, was pretty cool.  I liked how that contrasted the satellite plus blood combination necessary for calling on Oma.  The deadly flora of the world was also cool to read about.

I did have some issues with the world building, mostly with how gender was used/defined.  The Dhai, we are told, use five genders: female-assertive, female-passive, male-assertive, male-passive, and ungendered.  I couldn’t understand how being passive vs assertive changed your gender.  I understand that you can have a linguistic marker of politeness or class (Japanese uses different pronouns to denote this), but again, how does it change gender?  That leaves 3 genders, which is what the Saiduan use, denoting male, female, and ataisa.  Why then does Roh, a Dhai, have trouble understanding which pronoun to use for the ataisa when his language has something similar (ungendered)?  Yes, the two languages use different words (ze vs hir), but that’s a linguistic difference, not, necessarily a gender difference.  I was left wondering if the ataisa and ungendered were in fact different genders, rather than different words for the same ‘doesn’t fit into male or female’ category.

I also disliked how the genders in Dorinah are basically swapped.  Women are larger, stronger, better educated, assertive, domineering etc. than men.  Men, meanwhile, are only around as possessions, useful for status, sex, and children.  They’re weaker and powerless over their own lives, fully submissive to the women who own them (their mothers and wives).  I was ok with the idea of gender swapping the country (making it matriarchal), but when you give the men all the stereotypical characteristics of women and all the women the stereotypical characteristics of men, you’re basically saying that traditionally female attributes are weak/useless and male ones are strong/worthwhile.  Rather than pitying Anavha, Zezili’s husband, I found myself reviling him, and felt bad about it considering he’s basically a stand in for an 18th century British woman (stereotypically speaking, of course).

I did enjoy the sexual politics of the different countries, how many husbands/wives different groups had and whether that was a matter of status or openness of their cultures.  Seeing the Dhai culture’s openness with regards to loving both genders freely was also refreshing.  I’d have like to learn more of how the Dhai deal with marriages, as I imagine genealogies would be hard to track with multiple husbands and wives in the same marriage (and an openness to affairs), as would preventing incest (assuming that’s not allowed there, which isn’t a given, considering Ahkio and Liaro are cousins).

Lilia’s actions towards the end of the book felt rushed.  While much of the book took time to thoroughly develop things, Lilia manages to take several important actions with little preparation or training, which didn’t seem as realistic as what happened earlier.

This was a slower read for me, mainly because so much was happening.  I needed to take my time with the book in order to keep track of everything.  It had some things I loved, some things I liked and some things that irritated me.  On the whole, it’s a fascinating story with some great in depth world-building and some intricate real world style politics.  I’ll be curious to see what happens next.
Email ThisBlogThis!Share to TwitterShare to FacebookShare to Pinterest
Posted by Jessica Strider at 11:15