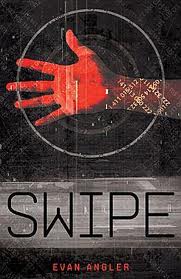 Cons: despite his job, Erin's father seems clueless regarding her intelligence and snooping

For Parents: no swearing, no sexual content, little violence (a few people get punched / hit with items, but nothing graphic)

Logan's been paranoid since his older sister died during her Pledging.  His thirteenth birthday, and the day of his own Pledging, is only a few months away and he's terrified of the same thing happening to him.  But Pledging means getting his Mark.  And only the Marked can hold jobs and buy things.  Then he discovers that his paranoia is justified, and his entire life changes.

Erin doesn't want to leave Beacon for Spokie.  But her dad's been transferred there for his job doing 'government work', whatever that means.  Her decision to snoop into her father's private papers opens her eyes to his purpose in Spokie; to stop a man kidnapping local children before they can take the Pledge.  She decides that the sooner this man is caught, the sooner she can return home.

The two kids team up to keep Logan from being the next to disappear.

Swipe tells of a future where global war has caused such problems that large parts of the US, Canada and Mexico - now called the American Union - are uninhabitable.  There are no religions.  The AU and the European Union are close to creating a Global Union.  Part of this new union required the Marking of all AU citizens.  Indeed, the only way to be a citizen and benefit from its privileges requires getting the Mark.  Those who choose not to get the mark are either servants, have someone with a Mark to support them or live in slums.

The world has some interesting new technologies to replace the more wasteful items of today.  Few people use paper anymore, tablets being mainstream.  Similarly, since air travel is now so expensive and cars the luxury of the super rich, people cross the country (if they need to) by magnetrain and get around cities by electrobuses and rollersticks (a device the size of a skateboard with a handle that works like a segway).

Logan is a great character.  He's introduced as the boy who cried wolf, being convinced for years that someone's watching him.  He's neither popular nor friendless.  He's a pushover until he finds a reason to fight back.

Erin on the other hand is very brave and bold, coming up with new plans for how to catch the kidnappers.  Not always good plans, mind you, she's only 13, but she is quite clever.

The book has some great twists, heading in directions I didn't expect.  I especially liked that there were no easy answers for the protagonists.  They make mistakes and at the end they each make decisions that work for them - and their view of events.  The book is fast paced and a quick read.

My only complaint was with how long it took Erin's dad to figure out what she was up to.  He seemed surprisingly clueless as to her keen intelligence.

A great book for adults, teens and maybe even younger kids - with some interesting discussion possibilities.
Email ThisBlogThis!Share to TwitterShare to FacebookShare to Pinterest
Posted by Jessica Strider at 12:34