I had several comments on my steampunk reading list:

Thanks to those who added new books to the list (Nuno, Josef, ediFanoB, manly28s, Jeff, Roger & Rob Ward). 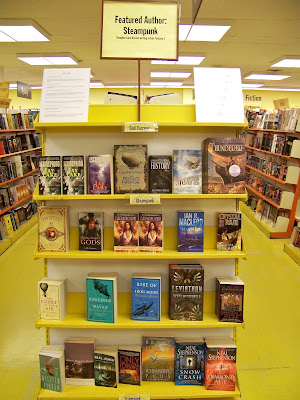 Here are their additions, as well as the display from the store where I've got steampunk featured this month (and my reason for creating the list). The empty space at the top was filled with Soulless by Gail Carriger last week. Imagine some still there if you'd like. Also, the bottom row contains cyberpunk as I couldn't think of enough titles at the time to properly fill the endcap. I'll have to add a few of the following books to my order lists!

I didn't really examine these new steampunk titles, so I'm not taking credit for the list or being held responsible in case of disputes. :)


I found steampunk to be harder to define as a genre than I used to believe when I put this endcap together. I characterized steampunk as
1) takes place in Victorian London
2) uses steam or steam derived technology

There's a lot of leeway there, but there's also a lot of ambiguity. I'd considered Anubis Gates by Tim Powers while making my list but considered it more time travel than steampunk. Similarly Felix Gilman's series isn't on Earth, so can it be steampunk? Then again, Soulless is more of an urban fantasy than steampunk despite it's Victorian setting as there's not much technological examination going on. And I've read the Golden Compass and it didn't even occur to me that it was steampunk until someone mentioned it (but in retrospect it covers my 2 criteria). In examining my criteria, if it has to take place in England, that would kick out Cherie Priest's Boneshaker, which takes place in North America, and is most definitely steampunk. It would also kick out Leviathan by Scott Westerfeld, which takes place during World War I. And then there are books like Around the World in 80 Days by Jules Verne. Does it count as steampunk if the author LIVED during the period in question?

Does anyone else have this sub-genre classifying problem? Where a story seems to fit more than one genre or where you hesitate to group it into another category? (Like Pax Britannia, which I put under alternate history, and so didn't consider that it was also steampunk.)


* added note: Obviously based on the books in my previous list and the one above my practical definition of steampunk is broader than my original definition allows. As someone commented on this page, wikipedia has a great definition.
Email ThisBlogThis!Share to TwitterShare to FacebookShare to Pinterest
Posted by Jessica Strider at 14:33

From my point of view there are no strict borders. Here is one definition of steampunk literature.

Sweet. I look forward to reading some of these.