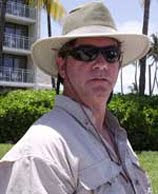 Novels: Waaaaaaaaay too many to list. Don't believe me? Check out his website book link. And then click the series links to see the individual books.

> Pitch your latest novel or the first novel of your series.

(Insert name of whatever the hell is coming out next I can't keep up) is the GREATEST NOVEL OF ALL TIME! It will ASTOUND AND DELIGHT children of all ages with SEX AND VIOLENCE AND GORE GALORE!

Huh. What IS coming out? Thirty Two novels. First one came out in 2000. I really do have a hard time keeping up...

Oooo! Live Free or Die in February. Got an Ontario aspect to it. A must read for every Canadian who cherishes their national symbol! SAVE THE MAPLE TREES FROM ALIEN DOMINATION!

Time Enough for Love, at least the first half. After that he rather jumped the shark.
The Two Towers
Reaper Man by Terry Pratchett

I write because I enjoy affecting others. The staying home and getting checks is nice but even without it I'd be trying to get people to read my stuff. When I write a line and go 'Heh, that's going to get somebody chuckling/crying/thinking' and then later it turns out I'm right? Way more important than royalty statements.

My favorite is Katya, the psychotic, sexually-absued former-hooker-turned-assassin in the Ghost series. Because she reminds me of half my ex girlfriends and if I didn't like them I wouldn't have dated them in the first place.

Reynolds, the hapless jeep driver in the very beginning of Hymn.

Not in a heartbeat. Maybe, MAYBE, Tyler Vernon from the Troy universe.

I'd take the world BEFORE the Fall in the Dragon's universe.

> Would you live in somebody else’s?

Not most. Most are WAY too ugly and dangerous. I mean, really, Conan spent most of his time scratching flea bites and digging lice out of his hair not rescuing maidens.

The Voyages of King Arthur. Unpublished. About a month.

>What is the strangest question you have ever been asked by a fan?

'How do you kill a vampire?' (As in, 'Given that everyone knows that vampires are real and a real threat to me, personally, and to society, how do I go about killing the REALLY REAL vampires that are in my mother's basement?')
The answer being: 'Go with the traditional stake of ash wood and you've got about a ninety percent chance of getting it right. Good luck. Next question.'

DragonCon. Any year. Because it's like being on a space station most of the time.

> If you still have one, what’s your day job?

Also don't have one. But if you want to be a writer, I'd suggest accounting.

Fantasy. I don't care how much people talk about world building, you can make it up as you go along and fill in the details in the appendix.

In the winter, outside. I wish I lived in Canada. I could write year round. As it is, I have to wait for winter when it gets cold enough. (I have a silicon brain.)

Best: WORK FROM HOME IN YOUR SPARE TIME!!!! ads make you laugh and laugh...
Worst: You look forward to kids getting home from school so you can actually talk to someone for three seconds...

> What is something you didn’t know about the publishing industry before you had your fist book published?

The truly gigantic and gargantuan and titanic and all the other synonyms for big size of the average 'slush' pile. (Unsolicited manuscripts.) Then, later, when I wanted to do a Posleen anthology I found out that it truly is 'Shoveling to a mountain of crap to find a nugget.' The reason that the 'traditional' publishing model is unlikely to ever go away entirely is that somebody is always going to have to sort through the fecal matter looking for the nuggets.

Edit the hell out of it, edit it again, read it aloud to yourself (every damned word and you'd better not get bored or the reader will) edit it again, print it out or format it EXACTLY the way the publisher asked for it and submit it. Then get ready to wait about five years for it to see the light of day.
Oh, and one thing before that. Finish it.

One. For A Hymn Before Battle. Jim Baen fired the First Reader.
Email ThisBlogThis!Share to TwitterShare to FacebookShare to Pinterest
Posted by Jessica Strider at 14:33

Does anybody know when the sequal to "Under a Graveyard Sky" is due out?

The sequel's called To Sail a Darkling Sea and it's out in February of 2014.