Book Review: War Against the Weak by Edwin Black 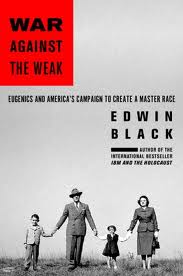 War Against The Weak is a surprisingly readable history book.  It details the almost unknown rise of the pseudoscience of Eugenics, how the movement became popular in America and was instrumental in enacting laws that led to the sterilizing of thousands of people and ultimately caused the holocaust in Germany.

Mr. Black is careful to cite all of his sources, compiling research put together over several years with the help of people in several countries.  Each chapter deals with a different issue of eugenics, introducing the players pertinent to that aspect (whether it was sterilization, marriage laws to prevent whites from mingling their blood with 'undesirables', so called intelligence tests (IQ tests), and more.  Later chapters become a bit tedious as he reminds you of people and things brought up in earlier chapters, but the background information is always necessary going forward.

He traces the connection between American eugenicists and their European counterparts, going so far as to show their support for, and correspondence with, Nazi doctors.

It's truly terrifying how people justified their racism and called it 'science'.  It's even more scary to find yourself agreeing, not with their means, but on rare occasions with their reasoning.  I can understand their wanting to prevent hereditary diseases from being passed on.  I don't think sterilizing the individual AND THEIR ENTIRE EXTENDED FAMILY is an appropriate way of achieving this goal.  Especially when 'hereditary diseases' involves blindness caused by any means (including accidents in adulthood), which was one of their campaigns.

The ending of the book is quite bleak and cautioned against the possibility of using genetics (the modern and more accurate science eugenics morphed into) as a means of discrimination in the future.  I would never want to live in the world depicted in the movie Gattica, where your genes, and the possibility that you might not succeed determines that you're never given the chance to try.  According to this book, that may in fact be the future we're heading for.
Email ThisBlogThis!Share to TwitterShare to FacebookShare to Pinterest
Posted by Jessica Strider at 20:17

It's scary to know people actually believed that not so long ago and I'm sure some still believe it today.