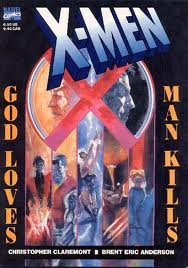 Cons: rougher artwork than X-Men usually had at this point

One thing that can, unfortunately, be said about the X-Men is that the central theme of racism never goes out of date.  God Loves, Man Kills was first published in 1982 and reissued in 2007.  And the story's perhaps even more relevant now than when it came out.

Reverend William Stryker uses his TV savvy and fear of the unknown to woo citizens into believing his message that Mutants are ungodly and pose a serious threat to humanity.  Believing Professor Xavior to be the Antichrist, he has created a squad of 'Purifiers' with the intention of killing all mutants.

While I didn't particularly like Anderson's rougher artwork (compared to what was being done in the monthly issues at the time) it does suit the darker storyline.

Even the characters' language is much starker, with both n****r and b***h being used - to good advantage.  The language choice underscores the seriousness of the issues under discussion, creating uneasiness and forcing this reviewer to truly think about what was happening and why.  The fact that 'mutant' can be exchanged for 'nigger' or 'rag head' or fag', for the 'other', the undesirable, those discriminated against, makes this a story that will have relevance in every age as each generation finds a new 'enemy', a new class of immigrants, a new 'abomination' to rail against.

Chris Carter Claremont (whoops, sorry about that.  X-Men and X-Files were both things I enjoyed in high school) could have taken an easy way out by making Stryker and his purifiers cardboard cutouts.  But he doesn't.  While Stryker does come off as being a little insane, he has reasons for his beliefs and can be persuasive at times.  As for the rest of the antagonists, history is full of people who, for fear and hatred of the unknown, are willing to kill.
Email ThisBlogThis!Share to TwitterShare to FacebookShare to Pinterest
Posted by Jessica Strider at 09:54

I've been looking to get back into X-men. I'll have to pick this up.

I stopped reading X-Men for several years. I'm back to rereading the older stuff (when Storm, Wolverine, etc. were introduced). Somehow I missed this graphic novel the first time around.

Good review, just ordered this myself, rather looking forward to it comming through my letterbox now