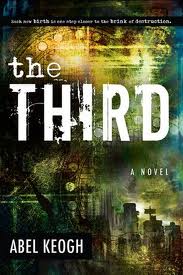 Cons: the intense scenes get disturbing quickly (baby waved around by leg, character threatens rape), protagonists actively make their lives harder, unrealistic division between those who end up with 3+ kids and the law abiders

The year is 2065.  A carbon tax has drastically reduced the number of cars and raised the costs of food and products, there are frequent power failures and rampant overcrowding.

Taya is three months pregnant with her third child.  Concealing it is a population crime.  When she finally gathers the courage to tell her husband, Ransom, their options are limited: find someone willing to sell them their replacement credit even though the couple can't afford to buy one, put the child up for adoption or let the city give her the mandated abortion.

A random act of courage and kindness opens the way for a fourth option - to leave the city.  But is it worth the risks of trusting people they've been taught are terrorists?

The future Keogh paints is bleak and unpleasant.  Food is scarce, milk is purchased powered, water is monitored in 5 second bursts and the Census Bureau officers (officially called sentinels but colloquially called 'snatchers') are cruel bullies who fear no reprisals (reminding me of the Blue Coats from Laura Bynum's Veracity).

The book has noticeable debut author flaws.  Conversations contain a bizarre amount of background information and people constantly lose their tempers, calm down, apologize and then show they're extraordinarily aware of their psychological workings.  Though all of this is accumulative, it seemed odd that so many people were aware of and willing to explain their reasonings for how they act.

Keogh also has a bias, which is a little strangely portrayed.  Everyone who's willing to break the law (in any way, with the exception of the sentinels) or risk having more children then allowed, is portrayed as being kind and decent and only wanting their freedoms.  Those who think limiting the population - even the well spoken Census Bureau director, Teya's sister, is shown as being mean hearted and wrong (despite her well reasoned arguments for why population control is a good thing).

The strange thing is this.  The 'good' people, who want more kids, are also more willing to waste water (as Ransom does at the beginning of the novel), electricity and other resources.  And yet, somehow the resistance (or terrorists, according to the city) somehow have better access to fresh food and working technology than the city, which the novel never explains.

Despite the problems, this is a good novel.  There's a lot of book club discussion potential.  And it's one of the most realistic near future representations I've read.
Email ThisBlogThis!Share to TwitterShare to FacebookShare to Pinterest
Posted by Jessica Strider at 10:43