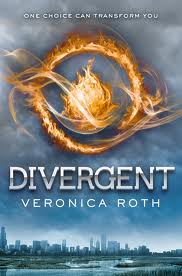 Cons: gaps in the worldbuilding that experienced readers will pick up on but others probably won't care about, ending doesn't hold up to the book's internal logic

In a city where kids are raised in one of 5 factions (Abnegation, Candor, Amity, Erudite and Dauntless) nothing is more scary than being factionless.  Beatrice and her brother are both at the age when youths get to choose their factions.  They can either stay in Abnegation, or move to one of the other factions.  Whatever they choose, there's no going back.  Beatrice wants to be in Dauntless, the faction of the brave, but is she brave enough to turn her back on her family and try something different?

The novel has a unique divisionary structure.  After a war the people decided to separate into the group best suited to their personality, which is opposite the trait that group felt caused the war.  The warning being that anything taken to extremes is bad.

The dystopian world is fairly well fleshed out, but more discerning readers will find strange gaps in the worldbuilding.  For example, the Erudite want more cars and luxury items and Beatrice is surprisingly wasteful when it comes to clothing (throwing out pants because of blood stains).  Yet, when Ms. Roth described what jobs each faction performs, no one's said to be in manufacture.  Amity grows food, Dauntless police, Abnegation does road repairs and charity word, Erudite are all teachers and researchers and Candor's full of lawyers.  It also seems strange that they would need so many lawyers when there appears to be no justice system.  When one of Beatrice's fellow initiates seriously injures another, no one steps in to find out what happened.

Beatrice is an interesting protagonist who has to make difficult decisions and learns that the world isn't a very nice place.  The author does a great job of letting the reader experience everything Beatrice goes through.

Readers who like romance will enjoy Beatrice and her beau's attempts at coming to terms with who and where they are in life.

For me, the ending was problematic.  And here's where the spoilers come in.  If you're planning on reading the book, stop here.


As part of training the initiates are given shots that allow them to experience simulations as though they're real life.  Beatrice, as a divergent, is able to recognize when she's in a simulation and break out of them faster than others.  When the climax hits, everyone in her faction has been put into a simulation and commanded to attack another faction, for some reason she's not affected by this.  Nowhere in the book did it say that as a divergent she wouldn't be affected by the simulation, in fact, the author clearly states that she WILL be affected, she'll just be able to leave the simulation quickly.

I also wondered why the Erudite were bothering to put out propaganda against a faction when they had a more direct plan in mind for taking them out.  And how long were they planning this?  Beatrice's mother was warned that being a divergent was dangerous, which would have been at least 18 years before the actions of this book.  Seems to me the Erudite could have found a group of willing Dauntless to agree to take out their enemies, rather than the more complicated plan of drugging everyone and making them fight.  Not to mention, simulations are supposed to allow people to react to whatever the situation is, not act as mind control.  And if it is mind control, wouldn't there have to be more people controlling the groups, else how do you get them to fight effectively when they're walking into and around buildings?  Too many things were left unexplained/under explained at the end.

And it seemed strange that Beatrice could shoot well enough to wound two people she hated, but had to shoot her actual mind controlled friend between the eyes.  Why didn't she just disarm him and wait for him to recover?

I don't mind romance, but I found the ending a bit baffling with that regard.  Seriously, the day a woman sees her parents get shot and killed is not the day she wants to hear you declare your love for her.  There's a time and a place.  Give her comfort and then tell her you love her when she's not in shock and has had the chance to grieve.
Email ThisBlogThis!Share to TwitterShare to FacebookShare to Pinterest
Posted by Jessica Strider at 11:40

I have to disagree. I think the problems in this book make it more unpredictable and relatable. No one wants a perfect book, that just makes a person jealous and is no fun to see the characters enter into perfect decisions. Tris struggles in the relationship with Four, and his mistakes make it more relatable. The way Erudite can exploit and manipulate such a large number of people is intriguing and makes me wonder if our world will ever result in that. And overall, I think the book was very well thought out and the plot is very well executed and continued in Insurgent which I highly recommend that you read.