REVIEW: Eutopia: A Novel of Terrible Optimism by David Nickle 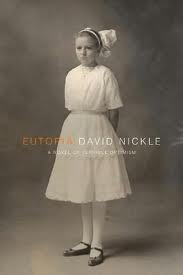 Cons: the supernatural aspect isn't as scary as the historically accurate parts

Eutopia takes place in the early 1900's when the eugenics movement was becoming popular with a certain type of people.  Mrs Frost, an agent of the Eugenics Records Office finds her nephew is the sole survivor of a plague ravaged frontier town.  She brings him with her to Eilada, Idaho, where an industrialist has started what he intends to be a utopic community.

But not everything's rosy in paradise.  The town's black doctor, Andrew Waggoner, has had a run in with the Ku Klux Klan and discovered that his colleague, Dr. Bergstrom has been keeping a 'Mr. Juke' in quarantine.  The more Dr. Waggoner learns of Dr. Bergstrom's actions and who, or what, Mr. Juke is, the more imperiled his life becomes.

Because Mr. Juke's family is coming to get him back.

For a novel that has such a horrifying supernatural creature at the heart of it, the true terror of the book was contained in the historically accurate parts.  It's hard to be afraid of made up monsters when the Klan and practicing eugenicists show up.  Indeed, when you see the unrepentant Mrs. Frost and delusional Dr. Bergstrom own up to their crimes, no fictional monster could possibly stand up to the horrors humans are willing to perpetrate on each other.

I call this novel courageous because Mr. Nickle focuses on a period of history most people pretend didn't exist.  The eugenics movement died after the holocaust showed the end result of such thinking.  But denying that sterilization happened in other nations (including Canada and the U.S.), as painful as it is to admit, denies the injustices done to people in the past due to racism and elitist thinking.  And allows the possibility of repeating such things.  Fiction allows us to examine issues we'd rather not, in the safety of the present, when we hope such occurrences will never be allowed to happen again.  In this way it reminds me of Blonde Roots, by Bernardine Evaristo, which flips history so Europeans are enslaved by Afrikaans.  It shows how racism can go both ways and only the conquerors decide what is right and who are the elite.

People will find reading this book uncomfortable, for the subject matter and the liberal use of the 'n' word.  We have whitewashed our history and no longer want to acknowledge the attitudes and language of the past.  Even the subtle put downs black men faced, like using Dr. Waggoner's Christian name when addressing him, rather than his title, are accurately represented in this book.

The ending is tight, bringing all three plot lines together in surprising ways.  It's an ending that is both satisfying, and thought provoking.

(Disclaimer: David Nickle is a regular at the bookstore where I work and provided my review copy.  Having said that, the book was so good and the topic so fascinating (in a horrifying way) that I read the 600 page history book the author researched while writing Eutopia, War Against the Weak by Edwin Black.  I highly recommend reading it.  It will open your eyes about racism and the holocaust in, well, rather unpleasant ways.)

Email ThisBlogThis!Share to TwitterShare to FacebookShare to Pinterest
Posted by Jessica Strider at 20:12