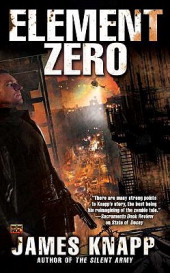 Things quickly come to a head in the third and final revivor's novel.  Fawkes flips the switch that turns unsuspecting humans into revivors using the HUMA virus.  But he's also made some adjustments to the virus' code, which FBI agent Nico Wachalowski slowly realizes are as much of a threat as the other weapons Fawkes turns on the city.

Meanwhile, Motoko Ai's war room is abuzz and Zoe Ott has some visions of what happens after the coming event.  Visions that make her question whether Fawkes is really element zero after all.

Once again the writing is tight and the motivations realistic.  It's often hard to tell which side is worse: Fawkes, willing to destroy the city and perhaps humankind or Ai and her people, who use their powers of mind manipulation indiscriminately.  The book is action packed but never loses sight of the humanity of its protagonists - forcing difficult decisions on them and watching them deal with the consequences.  And each new revelation causes you to switch sides, first hoping something happens, then hoping it doesn't.

My only complaints were that the denouement at the end wasn't offset from the climax, so it took a moment to reorient myself to the protagonists change of location.  I also found issues of dating problematic (whether this book took place 2 or 3 years after the previous one) - though that's more likely caused by my own lack of attention.  You have to keep your wits about you reading these books.  Let your mind wander and you've just missed something crucial.

Tense plotting, great characters and a satisfying conclusion make this series worth reading.
Email ThisBlogThis!Share to TwitterShare to FacebookShare to Pinterest
Posted by Jessica Strider at 17:10