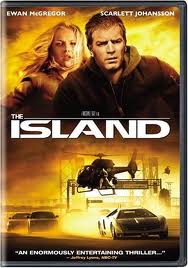 Lincoln Six Echo (Ewan McGregor) has been having nightmares so his computer system sends him to see the doctor.  On his way there, the newest lottery winner for the Island has been announced.  Lincoln knows he's special, that he was lucky to survive the contamination that destroyed the outside world - except for the Island - but that doesn't stop him from questioning his existence in this compound.

He soon discovers that the Island is not what was promised and must escape with the newest winner, Jordan Two Delta (Scarlett Johansson) in order to save her.

The Island begins brilliantly.  We have no idea what's happening and must follow the characters to learn that there was a catastrophe that has caused people to live in these high tech areas, away from the outside world.  The technology, while severely intrusive, is fascinating. When the reality of the island is revealed, both it, and the lottery surrounding it, are brilliant (if creepy) tools.

Then the two escape.  Suddenly this well crafted, intelligent film, falls apart.  The facility owner calls in a special crack team to track them down.  Somehow, he manages to wait until the fugitives have reached civilization before sending someone to bring them back (rather than picking them up in one of the company helicopters while they ran across several miles of empty desert, where there would have been nowhere for them to hide).  This team of ex-swat and other highly trained groups then start a comical chase wherein several of them die, several cops get killed and the two manage to out fly them on jet/motorcycle things (despite Lincoln never having seen one of these before, let alone piloting one).

Things go downhill from there.  Ignoring the fact that it would have been easy to create something that would incapacitate anyone who manages to leave (Jurassic Park thought of this), it's impossible to believe that two people who know nothing of the outside world (money, trains, homicidal maniacs) would be able to evade recapture.  And the extremes the group went to in order to recapture them was ridiculous.

Ultimately, I thought the film was good for the premise, but wasn't executed well.

When Lincoln meets his clone he seems to think this man, who paid millions to have him created, would want to help (despite knowing a double has been created to provide organs, etc. when needed).  I couldn't believe the corporation didn't tell the people he sent to retrieve them that clones are tattooed on their wrists.  The guy, with no ability to tell the clone and original apart, then randomly shoots one of them.  Seriously?

And no one at the facility questions which one was shot and how the guy knew who the clone was.

And the very end left me filled with questions despite it's flimsy happy ending.  What happens to the clones after they escape the facility?  Are their lives protected under laws or will they just be sent back to the facility since they're not 'human'?  Who'll provide housing/jobs/money/food for them when they have no outside world skills?

And on a different tract, why did the facility head go after Lincoln when he had tons of security officers?  If the clones were programmed to be uninterested in sex, how did Lincoln and Jordan override that?  Why was the facility only harvesting one organ or a baby from the clones?  Isn't that a waste of good human material?  Why not take the other organs, if you're going to kill the clone anyway, and use them in transplants for people other than the original client?

Email ThisBlogThis!Share to TwitterShare to FacebookShare to Pinterest
Posted by Jessica Strider at 16:25