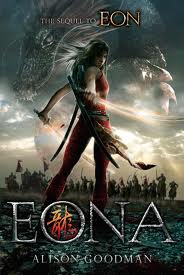 Cons: lack of character development, Eona has dubious morals and isn't as likable as in the previous book

For Parents: minimal swearing, sexually suggestive material (but no sex and nothing explicit), fair amounts of violence including descriptions of torture, positive use of secondary GLTB character

Eona begins where Eon left off.  The Dragoneyes are dead with the exceptions of Lord Ido and Lady Eona.  Sethon has declared himself emperor.  Eona, Dela and the seriously injured Ryko want to join forces with the escaped Emperor Kygo, but Ryko can no longer be moved.  Eona uses her powers to heal him, an impulsive act that has two serious and unforeseen consequences, one of which is the subjugation of his will to hers.

By the time they do meet up with the true Emperor, Eona is once again a keeper of dangerous secrets and realizes she needs Lord Ido's help to learn how to control her powers.

The book has two main focuses: the dance between Kygo and Eona with regards to power, trust and attraction and Eona's attempts to learn more about and control her power.

What made Eon such a great book was the intricate world-building, learning how dragon power worked, palace politics and seeing how Eona managed the expanding network of lies she was trapped in.

With Eona, I'd hoped to see her rise above the lies, now that they'd all been revealed and prove that living a life of lies was not her choice.  I'd also hoped to see her consider the consequences of her actions more, as a result of having to come clean about all the lies she'd told.  Alas, in the sequel she proves even more susceptible to deception and impulsive actions than she was in the first.  Constantly going overboard and then getting angry when it was pointed out to her that she needed to act more responsibly.

Her relationship with Kygo was realistically complex given their lack of trust and respective positions of power.  Seeing them start to grow closer and then build new walls between themselves was alternately entertaining and frustrating, a reminder of how young they both are.

I liked the explanations regarding Kinra and the Imperial Pearl.  And the battle between Sethon and Kygo's forces was brutal as befits real warfare.  Ms. Goodman proved throughout the story that she wasn't afraid to kill major players, which added to the tension of the book as a whole.

Ultimately, I didn't particularly like Eona in this book.  She took the worst aspects of her personality and built on those rather than learning from previous mistakes.  The ending, though good, was surprisingly abrupt, leaving a lot of her and Kygo's future and the rebuilding of the Empire in question.
Email ThisBlogThis!Share to TwitterShare to FacebookShare to Pinterest
Posted by Jessica Strider at 11:37