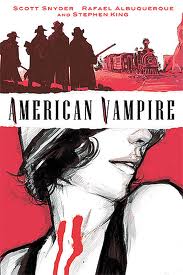 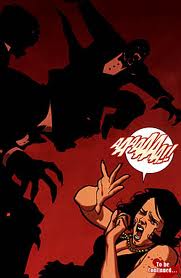 Each comic (there are 4 in this collection) starts with a story by Scott Snyder involving aspiring actresses Pearl and Hattie.  Things don't go as expected when Pearl's invited to a party hosted by the producer of the film she's an extra on.

The second story, by Stephen King, deals with the origin of the titular American vampire.  A wild west bank robber is accidentally turned by a European bank owner during a bust gone bad.  But where the European vampires have trouble in sunlight and can't cross water easily, their American counterparts have no such weaknesses.

The two stories work well together, slowly explaining the vampire situation in the new world and how they evolve as a species based on different blood.

The artwork is blocky and thick lined and while it's normally not to my taste, it suits the subject matter here surprisingly well.

Ultimately it's a great grapic novel.
Email ThisBlogThis!Share to TwitterShare to FacebookShare to Pinterest
Posted by Jessica Strider at 10:47