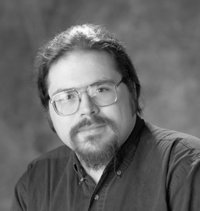 > What's the Apotheosis Trilogy about?
The Apotheosis Trilogy is about a lot of things, but they all revolve around the philosophical and spiritual implications of Transhumanism and the Singularity, or― as I’ve said elsewhere― it’s taking the old saw about the Singularity being “the rapture for nerds” seriously, in all the implications of that statement.
> Having written in several genres, do you think it's easier to write science fiction, fantasy or horror? And why?
Each genre has its own pitfalls and strengths, and everything I use in one eventually gets applied to the others.  The world-building, for instance, in an epic space opera is actually pretty similar to that in an epic historical fantasy.
> You have two series coming out at the same time, your Apotheosis Trilogy and your Wolfbreed novels.  How do you 1) find the time to write so much and 2) keep all the information for 2 series straight?
I just write every day.  Write every day, even 500 words, and you’ll have a novel in less than a year.  I keep things straight by working on one project at a time; sort of serial monogamy for fiction.

> Has your engineering background helped you as a writer?
Everything that happens in life helps as a writer.  The engineering specifically, I think, has added some verisimilitude to my SF― but that can be true of any life experience.  It’s a lot easier to sound authoritative about the stuff you make up if you have some knowledge about the stuff you haven’t.
> What made you want to be a writer?
I think it’s genetic.
> What was the first novel (published or unpublished) that you wrote and how long did it take to write it?
An epic fantasy that shall remain forever unnamed.  It was 150,000 words, took over a year to write, and was utterly unsalvageable.  (Though I've ruthlessly stripped it for parts of many other novels.)
> When and where do you write?
Generally between 6:00 and 8:00 in the mornings before work at the day job, a little later and longer at home on the weekends.

> What’s the best/worst thing about writing?
Best: Getting paid for writing.  Worst: How much you get paid for writing.
> What is something you didn’t know about the publishing industry before you had your first book published?
How obnoxiously long everything takes to get done.
> Do you have any advice for hopeful authors?
Have a day job that you enjoy almost as much as the writing. As much as it crunches your time, removing the financial stress from the writing equation is a good thing.
> Any tips against writers block?
Write something every day.  If you can’t write one thing, write something else.  Write about why you think you can’t write.
> How do you discipline yourself to write?
Doing it the same time every day helps.  Having a ritual helps the brain to get into a writing mode.  Also, in my case, knowing that the rest of my day is so tightly packed that my little time in the morning is the ONLY shot I have to get something done helps focus the mind.
Email ThisBlogThis!Share to TwitterShare to FacebookShare to Pinterest
Posted by Jessica Strider at 11:04