I wasn't supposed to make this event, but a co-worker asked for my shift, so... 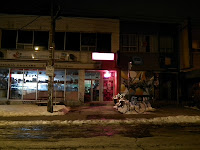 The reading took place at Augusta House, which you'd be excused for missing when walking down the street.  It's a small door with a red sign over it near Dundas St.  The door leads to a stairwell, and a dark but pleasantly atmospheric bar.

The price for pop was a prohibitive $2.50, but their appetizers (priced at $5 and $6) were tasty and came in relatively large servings (I had the spring rolls, which were meat filled and came with a delightfully spicy dipping sauce).  Beer, for the drinkers out there, was $4.

The event planners hosted several draws, for Bakka-Phoenix gift certificates, book bags and one Ad-Astra pass.  In order to help cover costs for the readings, they also passed around a donation box.

The readings themselves were excellent.  Forgive the graininess of the photos.  The room was very dark and I didn't want to disturb people by using a flash.  I took a few video clips, but they're dark and jiggly, so I'm not posting any.  The people running the event had a video camera well placed to record the readings (without people walking in front, etc.).  Click on the author's name to see the video of their reading on the Chiaroscuro site. 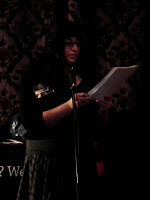 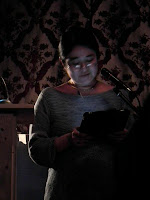 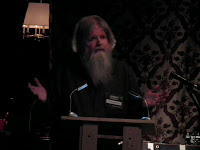 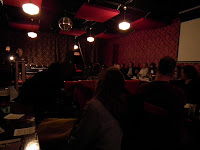 Ultimately it was a great event.  If you're in Toronto, check out their next event, Sunday March 6th, 8-11 (and the readings go all the way to 11, so don't expect to see everything if you need to leave early) when Cory Doctorow Comes to Town and reads with David Nickle and Karl Schroeder.
Email ThisBlogThis!Share to TwitterShare to FacebookShare to Pinterest
Posted by Jessica Strider at 12:54