Book Review: The Ask and the Answer by Patrick Ness 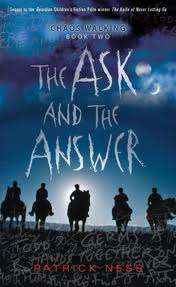 Pros: tense, shows how good people can be made to do bad things, thought provoking, great writing

Cons: incorrect grammar and spelling may be challenging for weak readers, violent

For Parents: fair amount of swearing, terrorism, torture (not excessively graphic but it is described), no sex

Todd and Viola have reached Haven, now New Prentisstown.  Separated by President Prentiss and not knowing if the other is alive, Todd's put to work under Davy Prentis's command.  Meanwhile, Viola learns about the Answer, a resistance movement against the President's rule.

But things quickly escalate for both protagonists and the line between good and evil is broken as each makes difficult choices.

Todd, Viola and Davy are all fleshed out characters.  Their motivations and decisions, while not always good, are understandable given the circumstances.

There's a fair bit of violence in this book, including torture.  While it's not excessive, younger readers will find it disturbing.  There's also more swearing in this book than the previous one.

It's a thought provoking book, showing not only how people will give up freedoms in the face of terrorism (both from guerrillas and the government) and how easy it is to go from one depravity to a worse one; to relax your morals bit by bit until nothing's sacrosanct.  Or almost nothing.

Great writing, fist person POV (both Todd and Viola) and lots of action make this a fantastic read.
Email ThisBlogThis!Share to TwitterShare to FacebookShare to Pinterest
Posted by Jessica Strider at 09:00