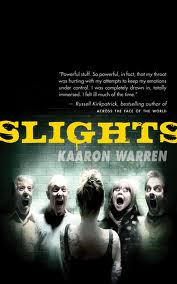 Stevie is an unreliable narrator.

She remembers her father, a cop, as a good, quiet man.  Others remember him differently.  He was the kind of cop who didn't like to see the guilty get away with their crimes, even when there wasn't enough evidence to convict them.

Stevie was 18 when her mother died, passenger in the car Stevie was driving.  The accident gave Stevie her third near death experience.  Before, she'd been too young to understand what happened.  This time she realized that when you die you enter a room.  A dark room.  A dark room where those you've slighter want to hurt you.

The book is presented as a horror novel and the premise is quite terrifying.  But in execution, it's less about horror than it is about the mystery of who Stevie's father was and what death actually holds for her.  And while she runs from the first mystery, wanting to believe her father was a great man, she runs towards the second, trying to get back to her room to see if it changes.

As a protagonist she's a thoroughly unlikable character.  She's rude, disrespectful and goes out of her way to anger the people in her life.  And yet, her story is fascinating and she somehow remains sympathetic.

The writing is strong and the pacing good, doling out enough clues to keep you interested.

One word of caution, try not to read the synopsis on the back of the book.  It contains a spoiler that makes part of the mystery a lot easier to figure out.  If you want to get a sense of the book, read the first few pages.
Email ThisBlogThis!Share to TwitterShare to FacebookShare to Pinterest
Posted by Jessica Strider at 11:58