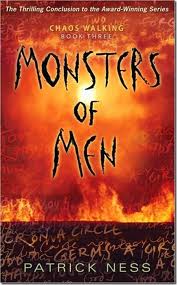 Pros: fast paced, action packed, shows some of the realities of war, learn more about the indigenous race

Cons: it's hard to believe how willing people are to follow Pres. Prentiss considering all the evils he has perpetrated, no downtime for the characters to consider their actions and thereby reducing character growth for this book

The spackle army has arrived along with another scout ship from the approaching colonists.  Both Todd and Viola are forced to make difficult decisions with regards to how to handle things that are happening too fast.  They want peace.  Is war really what's required to achieve it?  And is Pres. Prentiss redeemable the way his actions in leading the army make it appear?

The final volume of the Chaos Walking trilogy is a wild ride of war, terrorism, almost peace and tough choices.

For the first time we get to see the world from the point of view of the indigenous race, the Land (whom the humans call the spackle).  It's a culture adapted to a world where all thoughts are shared.  The way information is shared and hidden was creatively decided by the author.

The book had less down time for the characters to think about their actions - making it a bit of a wearying read for me.  I wanted to see more introspection, more consideration and discussion of consequences - at least by the adults.  But things happened so quickly and each chapter seemed to bring a new crisis.  There was no time to rest - for the characters or the reader.

I also found it hard to believe how willing the people - especially Todd - were to forget Pres. Prentiss's crimes.  Todd was tortured by the man!  He watched Viola tortured by his order.  The man banded all the women, killed all the spackle slaves.  He purposely caused the war with the spackle and yet the townsmen all cheered for him.  Yes, it's partially explained away by the President having power via Noise over people, but really, that much power?  Enough power to make the women forget the bands on their arms?

Then again, difficult situations can cause people to do strange things, and if the President was the only one with the skills to save them then maybe it's understandable that the people ignored the past and focused on the present.

The ending was surprising and remarkably well written.  It somehow fit the story - increasing the tragedy while again showing what can be learned through trials.

Chaos Walking.  Go read it.
Email ThisBlogThis!Share to TwitterShare to FacebookShare to Pinterest
Posted by Jessica Strider at 09:02