This past Saturday my husband and I checked out the Harry Potter Exhibit at the Ontario Science Center. It's been a while since I've read the books so I was actually going to skip the exhibit as it's fairly expensive. Then one of my co-workers came to work raving about it so off I went to get tickets. 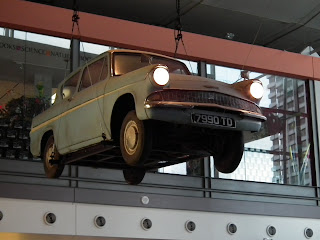 I'm glad I did. The exhibit was definitely worth the money. In the lobby are signs and the flying car from book 2, suspended in the air. They even turned on the headlights in the evening.

When you get to the exhibit (6th floor here), they let you in in 7 minute intervals. You have the option of renting the guided tour headset, which my co-worker said mentioned some great information. I decided to do the tour solo and found that fine.

The tour begins with a costumed guide sorting part of the group into Hogwarts houses. I made Ravenclaw. :) Then there's the Hogwart's express. It's a foggy exhibit, with the train and piles of luggage. There's even a wanted sign for Sirius Black (but not one that moves).

For the moving pictures you need to head to the next room. Here are some of the paintings from the school of witchcraft and wizardry. A few of them move, while others are stationary. The Fat Lady sits in the doorway trying to, unsuccessfully, break a glass with her voice.

This is where the displays start. There are props and costumes from the films, character wands (it's amazing how each one is different, and so intricate) and more. The bottles of spell ingredients from the potions class are there, as are Ron and Harry's beds (did you know the bed curtains are solid red on the outside and patterned with gold stars, etc. on the inside? Madam Hooch's flight robes were my favourite of the costumes, though Lockhart's dueling robes were a close second.

There were a few interactive exhibits, pulling mandrakes, throwing quaffles through hoops and trying out Hagrid's chair. A gentleman at Hagrid's hut explained how they made Robbie Coltrane look half-giant sized. Also by the hut was buckbeak the hippogriff, which was amazing. There was a baby thestral too.

But the best exhibit, was the one dedicated to the dark arts. There we got to see the angel of death statue that hung over Voldemort's family tomb. There we saw dementors and death eaters. And ministry of magic decrees. Read the last line of the decrees and know someone working on the film had a sense of humour.

Finally, there was the great hall. Here candles hung from the ceiling and formal robes lined the walls. It's amazing the amount of detail put into the costumes and props. The triwizard cup was spectacular. It makes you wish they'd focused in on more of these details in the films so you could really see what things looked like. 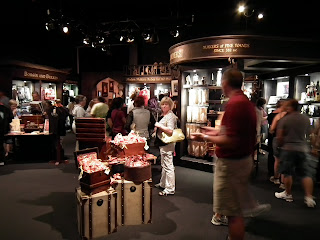 The gift shop was designed with Diagon Alley in mind. Several of those shops are represented here, names printed in gold over the goods most likely to be sold there. It wasn't perfect, of course, but it was fun. I only wish the prices were more reasonable ($4 for a chocolate frog, $9 for Berty Botts Every Flavour Beans, upwards of $50 for a decent replica wand).

Anyway, it was a great experience and if the exhibit comes your way I highly recommend it.
Email ThisBlogThis!Share to TwitterShare to FacebookShare to Pinterest
Posted by Jessica Strider at 13:13