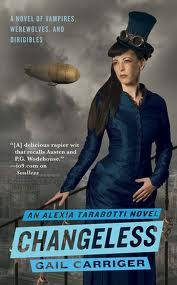 Pros: interesting world examined in more detail (we learn more about the supernatural council and get out of London), engaging writing

Cons: heavy handed characterization made some people feel like caricatures rather than characters (this lessened as the story progressed), Alexia seemed a little dense at times, cliffhanger ending that can be considered distasteful

I try not to be overly influenced by other reviews when choosing my books. Unfortunately, sometimes a negative review can overshadow your own thoughts and feelings on a particular work, whether it be a book, movie or art.

That was the case with reading Changeless for me. I'd read the 2 star review given it by RT (Romantic Times) and a friend who loved Soulless (the first book in the series) as much as I did had difficulty with the ending.

Every time someone was introduced or something happened I wondered, 'is X going to happen at the end?' It meant that the ending didn't bother me as much as it did others because the "what if's" I'd considered were much worse than what Carriger ultimately did.

But I'm getting ahead of myself. In Changeless, soulless Alexia Maccon has been married for 3 months and at odds with her werewolf husband on a number of issues. The plot starts quickly with a report that supernaturals within a specific area of London have suddenly become human - temporarily.

News from his former pack in Scotland prompts Lord Maccon to head home. Alexia's investigations into the supernatural affair cause her to soon follow after.

This book wasn't as much fun as Soulless. The opening had heavy handed characterization to the point that everyone came across as caricatures. I was surprised that, though she had council meetings twice a week, Alexia lived at Woolsey Castle, 2 hours from London - each way - rather than at their home in town. The number of surprise visitors they hosted was also high considering the commute.

Had I not spent the first 3rd of the book trying to figure out what the 'bad ending' was going to be, I'd have enjoyed the story a lot more. The plot was quick moving and interesting - though I figured some things out well before Alexia did, which is surprising as she's usually quite intelligent.

Still, it was fun and the ending, rather than turn me off, has me hoping for a good resolution in the forthcoming Blameless.


For those of you whose curiosity is peaked and who don't intend to read this book, here's the 'twist ending' and why I was ok with it.

Alexia's husband is technically dead. Werewolves are killed by the bite that turns them. They die and if they have excess 'soul' they become werewolves. If they don't, the bite is the end for them.

Now, as a soulless, Alexia's touch 'humanizes' the supernatural. But apparently, though they look human and lose their supernatural powers under her touch, they're still dead. In other words, Lord Maccon can have all the sex he wants, but he can't father a child.

Which causes Alexia problems as she discovers, at the end of Changeless, that she's pregnant. She's also never slept with anyone but her husband. Unfortunately, he no longer believes that and so casts her out.

After wondering if she'd have an affair with Major Channing, have an affair with Madam Lefoux, get raped, see Ivy murdered, etc. this sounded like the lesser of many evils. In fact, it rather explains the title Blameless for the next book. But it's entirely possible that had I not spent the first part of the book so occupied with guessing the ending I would have found Lord Maccon kicking out his pregnant wife more objectionable.

The other reason it perhaps didn't bother me was that despite being a cliffhanger I'm expecting everything to be sorted out in the next book. Most romance novels have something like this in them (a feature I usually dislike) but I can see the use here. It certainly had me devouring the excerpt from the next book that's at the back. And seeing quick witted and even quicker tongued Alexia deal with the accusations of scandal should be fun. It took me a while to read this book because I was afraid I would hate the ending and not want to read the next book (which has happened before). As it is, Blameless will trump my reading pile when it comes out because I REALLY want to see how things will resolve themselves.
Email ThisBlogThis!Share to TwitterShare to FacebookShare to Pinterest
Posted by Jessica Strider at 12:09