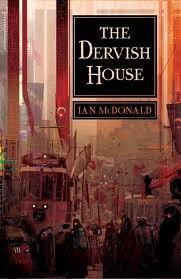 The Dervish House, by Ian McDonald

The novel is set in the Istanbul of 2027. Turkey is part of the EU. Nanotech is used to give people a mental edge, especially in businesses like trading and finance. And the lives of the people from the Dervish House at Adem Dede Square are about to change.

It all starts with a tram bomb. Necdet's on his way to work and is horrified when a woman blows her own head off. Traumatized by the event, he doesn't realize how badly he was affected by it until he starts seeing djinn everywhere.

Can Durukan, a 9 year boy, sends his computerized bitbot robots to the site of the bombing to see what he can see. Another robot attacks his and he's thrust into a mystery he's determined to solve.

Meanwhile, Ayse, an art dealer is offered a million Euro to find a legend, a Mellified Man.

Her husband has a deal of his own, a deal that could make him millions, or land him in jail.

Their stories and more intertwine to form a dazzling mosaic through 5 days in Istanbul. It's a sensory explosion, of names, places and actions. The plot becomes intricate fast, so pay attention when reading.

My only complaint was that so many names were similar enough between places and people, that when they were mentioned again I often couldn't remember who they were.

If you liked the lyricism of Guy Gavriel Kay's Under Heaven, you'll love The Dervish House.
Email ThisBlogThis!Share to TwitterShare to FacebookShare to Pinterest
Posted by Jessica Strider at 11:51

I just got this book from the library, can't wait to pick it up!