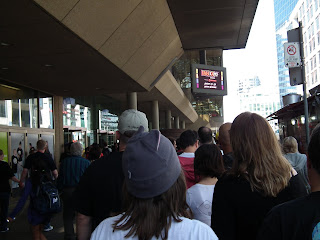 I only got a one day pass for Fan Expo Canada and with the crowds, one day was enough for me. We got there to find the show wasn't in the Metro Convention Centre's south building as usual, but the north building this year. We learned that when we saw the 'building closed' signs on the south building's doors. Like the others around us, we started walking the outside to the north building.

Which is where we encountered the lines. Yes, lines. One for people with wrist bands (who'd been at the expo the day before and who got in relatively quickly as a result) and one for those without. Communication wasn't that clear so there was confusion about the lines, and the non-band line split later into pre-paid and need tickets. 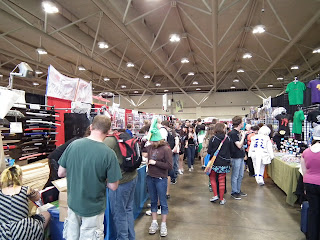 I'd expected to be in line 2+ hours, so the 1 1/2 was fairly good. Once we got inside we couldn't believe how crowded the floor was. The pictures I too don't do it justice because there were times raising a camera to take a photo wasn't practical. 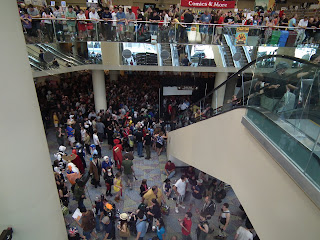 There were a few things off the trade floor I was interested in, the Tron Legacy presentation being foremost among them, but when we saw the crowd on the first floor waiting to come up the elevator (they couldn't because the trade floor was at capacity), I decided it wasn't worth leaving.

We had a great time looking around the various booths, bought several items and took tons of pictures. I'll be doing dedicated posts over the next week or so, for the gaming demonstrations, artists in the alley and more.
Email ThisBlogThis!Share to TwitterShare to FacebookShare to Pinterest
Posted by Jessica Strider at 15:10