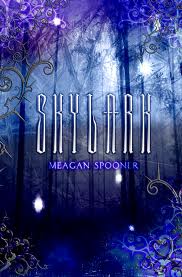 Cons: protagonist is conflicted, middle dragged, it became tiresome watching Lark get saved over and over again

For Parents: one swear word, some violence (killing), no sex

At sixteen Lark is older than the other kids at school, but she won't become a full adult until she's harvested for her magic and assigned her place.  Magic runs the city and keeps up the wall that protects them from the ravaged outside world.  When she's finally called, she's apprehensive about the procedure no one talks about and curious why they waited so long to harvest her.

An unescorted jaunt around the famicility shows her someone's horrific fate, a fate she soon realizes she might share.  She's able to regenerate her magic, a lost skill and valuable - for harvesting.  Fleeing for her life and her sanity, she breaches the wall and discovers how bad things outside really have become.  She knows she will be hunted.  She also knows there are other people outside the wall who are like her.

Kudos to Spooner for creating a dystopian setting that was substantially different from the rest.  It has touches of steampunk and a truly terrifying fate for Lark should she remain in the city.  After Lark leaves the city however, the setting becomes commonplace, post-apocalyptic (even if the apocalypse was caused by magic).

While I liked Lark, she waffled between competent and needing to be saved too often.  I understand that she didn't know how to survive in the wild, and I was ok with Oren helping her, but having him leave and come back to rescue her over and over again became tiresome.  This repetition made the middle section feel too long and drawn out.  She also waffled between altruism and necessity when it came to violence and dealing with those she met outside the wall.

The ending picked up the pace again and returned to the high tension, and high stakes, of the opening.  While I wasn't keen on Lark's choices at the end of the book, it was an exciting ending.

A good book for those who want a different dystopian setting.

Out October 1st.
Email ThisBlogThis!Share to TwitterShare to FacebookShare to Pinterest
Posted by Jessica Strider at 15:21