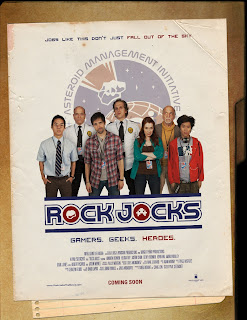 We stumbled across a movie trailer last night that looks pretty good.  Rock Jocks are the misfits who run the US government's covert Asteroid Management Initiative.  The AMI was started after an alien told the government that an asteroid belt would collide with earth.  The movie details the night shift of Rock Jocks dealing with boredom and the bureaucrat who's trying to cut their budget.

You can scroll through the cast list on their website, including Felicia Day (The Guild), Kevin Wu (KevJumba), Robert Picardo (Star Trek: Voyager).

For more information about the film check out its website.

Email ThisBlogThis!Share to TwitterShare to FacebookShare to Pinterest
Posted by Jessica Strider at 12:09