Book Review: The Death of Grass by John Christopher 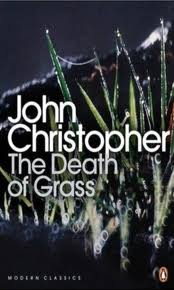 Not only do John and David Custance lead very different lives, one as a farmer in a remote valley in the British countryside, the other an architect in London, they also have very different views on most things.  But they love each other dearly.

When the Chung-Li virus that attacked rice in China spreads and mutates, no one is prepared for how quickly things deteriorate.  Given short notice to leave London, John takes his family and, with others, tries to get to his brother's farm.  The group is not only horrified by how far society has crumbled in such a short time, they're forced to make difficult moral choices that change them forever.

This is a story that could come true.  There are diseases that attack specific plants and the reactions of the countries - to give aid as long as they've got plenty of food stores and then to hoard their food when things threaten to get bad for them - is entirely realistic.

The characters themselves all act in realistic ways.  Rodger, John's best friend, whose family accompanies that of the Custances', starts out as a thoroughly unlikable, though extremely practical, man.  He understands how humans act in a crisis.  And the book bears him out as the simple motivation of get their families to safety eventually requires acts that at any other time would seem reprehensible to these same people.  On the other hand, Ann, John's wife, begins as the voice of reason and charity, but as the world falls down even she becomes both a victim and perpetrator of the violence around them.

The novel's tension surrounds both whether they will find safety and whether they'll digress into animals like so many around them.  And it is a very tense read, with actions and questions that will make you think long after you've put the book down.

Several things take place in the course of the story that are, without being detailed in the text, still disturbing in their implications.

This novel proves that sometimes the scariest possible futures are caused by natural disasters rather than war.

Email ThisBlogThis!Share to TwitterShare to FacebookShare to Pinterest
Posted by Jessica Strider at 10:01