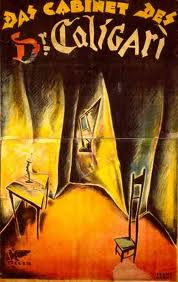 Cons: music was sometimes out of place

The version I saw was reconstructed by the Bundesarchiv-Filmarchiv of Germany with a musical score by Rainer Viertblock (1994) and English subtitles by Kino International (2002).

After hearing that a man sees ghosts, Francis (Friedrich Feher) tells the terrifying tale of recent events that affected himself and his fiancee Jane (Lil Dagover).  Francis is dragged to see the travelling fair by his friend Alan, who insists they see Dr. Caligari's somnambulist show and asks about his future.  Meanwhile several murders take place in the town.

This is a masterful film.  The director makes great use of shadows, making characters look sinister just by darkening the eye sockets and lips.  At times the music is used to advantage, heightening the suspense.

Having said that, there were other times when the jazz inspired score seemed out of place, using synthesizers and beets that thrust this viewer out of the scene.

The subtitle plates were up longer than necessary, but had a nice gothic look to them.

As with the other silent films I've seen, the acting was overdone with grand gestures and melodrama.  Given the horror aspects, the overacting actually works here, giving the drama a boost.

The ending's quite clever.  If you've wanted to try seeing a silent film, here's a good one to start with.

It's also in the public domain, meaning you can find it for free online.  You can find the version I saw here.
Email ThisBlogThis!Share to TwitterShare to FacebookShare to Pinterest
Posted by Jessica Strider at 16:00