The third of the four books included in the first volume of the American Science Fiction collection edited by Gary Wolfe is The Long Tomorrow. 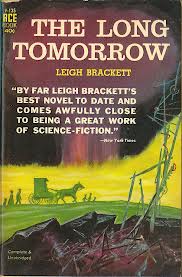 Pros: good writing, realistic extrapolation of the aftermath of a nuclear war

Len and Esau are cousins growing up in the New Mennonite Community of Piper's Run a hundred years after the atomic war that destroyed the United States.  The Thirtieth Ammendment states that no cities beyond a certain size are allowed to be built and the country has splintered into a variety of religious farmers and traders.

After witnessing a stoning, the boys realize their curiosity is peaked and they start dreaming of going to Bartorstown, a mythical city where old technology is still used.

Brackett is a good writer.  Her descriptions are solid and her plotting is direct.  The idea that a nuclear war would find religious zealots banning cities, in the hopes of avoiding such a thing in the future, is realistic (even more so for the early post-WWII world Brackett wrote this in, when fear of nuclear bombs was very high), as is the idea that many people would become Amish or Mennonite, learning from people who have always eschewed technology.

Having said that, if you like your post-apocalyptic fiction more Mad Max than Little House on the Prairie, like me, you'll find this book fairly boring.  What technology there is, is obviously patterned off of 50s understanding.  But it's so limited that it doesn't detract from the story.

Len's story arc, however, does.  I liked him in the first two sections.  He's young, idealistic, and unwilling to let go of his dreams regardless of how he's beaten and shamed.  By the third segment I realized that he's also the kind of person who's always chasing a dream.  He's never satisfied with where he is in life, because he's always sure it's better somewhere else.  Only at the very end, when he finally decides as an adult what he wants out of life and what he believes in, does he stop waffling and settle.

This is the first thing by Beckett I've read.  I wouldn't mind picking up something else by her, given the writing chops she shows in this book, but The Long Tomorrow isn't a book I'd read again.
Email ThisBlogThis!Share to TwitterShare to FacebookShare to Pinterest
Posted by Jessica Strider at 12:29

I read Brackett's the Book of Skaith for Vintage Science Fiction month, and enjoyed it, she's a great writer. I'd love to see what she does with post-apocalyptic. great review!