The final classic SF novel reprinted by the first volume of the American Science Fiction collection, is The Shrinking Man. 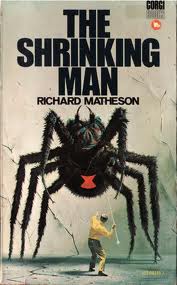 Cons: no time for the reader to take in what's happening, the shrinking is offhandedly explained

Scott Carey fights for his life against a giant spider in the cellar of his house, imprisoned by his ever shrinking size.  Between trying to find food and water in his dangerous world, he remembers the difficult road that brought him here, losing 1/7th of an inch each day.

He's a highly sympathetic character.  While it's hard to like how he treats his wife in the flashbacks, it's also hard to deny that anyone would feel the same in similar circumstances.  The novel explores his continuing sexual urges as well as his desire to be 'a man' in a world that increasingly views him as a kid, then a doll, then nothing at all.

It's a pulse pounding novel.  Whenever you think he's caught a break something goes wrong.  Then several more things go wrong and you wonder how he keeps going on.  Both the present scenes and back story are fraught with new perils he must face and, generally, escape.  The intensity rarely lets up, as everything becomes a danger to him.

Having said that, there's no time for the reader to do more than hang on for the ride.  A few times the author brings up more philosophical questions, but it's hard to contemplate life the universe and everything when you're running for your life, so the questions are asked and quickly forgotten as Scott gets on with living.

Readers who like solid science will be disappointed by the haphazard explanation of why Scott is shrinking.

At just over 200 pages, it's also a fairly short read, but detailed enough to give you insight into the characters and a wild ride.

It's a fantastic conclusion for this collection and an interesting read.
Email ThisBlogThis!Share to TwitterShare to FacebookShare to Pinterest
Posted by Jessica Strider at 12:35

I don't mind soft science and skimmed over explainations, and this is a book I've been meaning to read for a while. people stressed over their situations, medical bills, jobs, and feeling small and powerless? Sounds pretty current to me. However, I'll be getting one with different cover art, no way in hell I'm reading a book with a big spider on the cover!

More time is spent following Scott's current predicaments than in dealing with the problems of his past, but it is a very powerful story and a quick read. The book has had several different covers, but I think most of them have a spider on it. :)