Phoenix Pick has announced their August Free Book.  It's James P. Hogan's The Multiplex Man.  The coupon code for redemption is: 99922991.  Here's the plot synopsis for the book:

HE HAD A STRANGER'S FACE -- AND A DEAD MAN'S MEMORIES!

Richard Jarrow was a mild and unassuming teacher who was sure that the government knew best, with its strong environmental controls on industry and its equally stringent control of education and the media. He knew that the countries of the former Eastern Bloc, who now claimed to have more freedom than the United States, as well as booming economies fueled by their exploitation of the resources of space, were only spreading ridiculous propaganda, and they either would soon collapse, starved by their diminishing natural resources and choked in their own pollution -- or else they would attempt to steal the resources of the rest of the world, and have to be destroyed. Didn't the government say that was so?

And then his world went mad...

They're also instituting a monthly giveaway for their email subscribers, starting September.  The first prize is a $50 Amazon.com gift certificate.  All you need to do to be included in their drawings is join the email list.


The authors that run SF Novelists are giving away a sampler of their books.  The first chapters of 25 books are included. 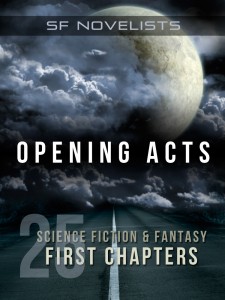 "The free sampler is available in epub, mobi, LRF, and various Smashwords formats.  The selections are:

Email ThisBlogThis!Share to TwitterShare to FacebookShare to Pinterest
Posted by Jessica Strider at 12:14