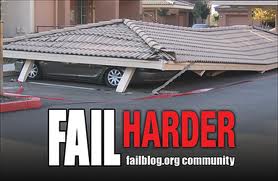 Several humour websites have started selling physical books from web content.  This is the second 'Fail' book the community has put together.

The difference between a website and a book however, is the expectation of added content.  When Lonely Planet made their Signspotting books (of which the first is funnier than the second - I heaven't read the subsequent ones), they put captions under the photos that 1) made the photos funnier and 2) often pointed out what the error was.

With Fail Harder, some of the photos are out of focus (to be expected when dealing with amateur submissions, but one thinks given the number of photos in their archives, they could have avoided this problem this early in the book deals).  Some of the photos take time to figure out what the 'fail' is, since there's no context for the photo.  And with many of the photos, the word 'fail' is superimposed, which, along with the unexplained fail icons (from the blog?) are distracting, feeling more like a pop up ad you can't get rid of then a helpful image.

While several of the photos are honestly funny and they are nicely categorized, it's not the best web based humour book out there.

The book comes out September 6th.

I've taken screenshots from Amazon.com's 'look inside' feature to illustrate my point above.  The first is from Fail Harder, the second, with amusing caption, is from Signspotting. 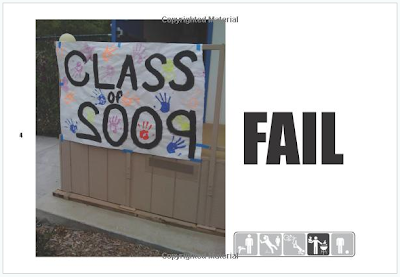 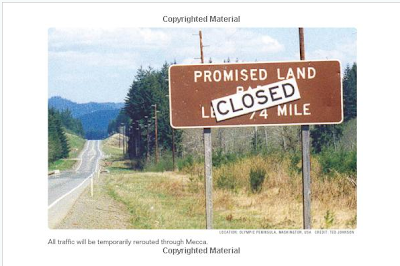 For those of you who can't read the caption, it says, "All traffic will be temporarily rerouted through Mecca."
Email ThisBlogThis!Share to TwitterShare to FacebookShare to Pinterest
Posted by Jessica Strider at 09:21